THE SMOKING AREA outside Studio No 9 of Famous Studios in Mumbai was rife with strange conversations. “Why didn’t he just finish him off?”, “Oh, I felt sorry for the bloke who was bleeding”, “The girl with the plaque cards was hot!”, “No, she could have been way hotter.”
Behind the doors, though, there was no scope for conversation. Loud pumping music and a crowd that was going “oooohhhh”, “yes, yes, yes” along with sounds of some groans and “ewws” gave one a feeling that something out of the ordinary was going on.
And no, there wasn’t a porn movie on! Instead, there were two fighters pounding each other in a ring surrounded by 400 Mumbaikars who could have looked more at home in any of the city’s expensive clubs, or at the Canadian rock singer Bryan Adams concert just a few kilometres away.
But instead they were here, at the Full Contact Championships, organised by Prashant Kumar, the co-founder of Full Contact Entertainment Private Limited. An adman by profession but a mixed martial arts (MMA) exponent for 20 years now, Kumar believes such fight nights will change the way Mumbai sees entertainment.
“It’s such a common thing in the United States. But in India, even MMA is still a fledgling sport. I bring fighters from all over India — from places such as Sangli or Haryana. Here, they are pitted against fighters who are trained in something completely different from them. So a judo expert will fight a kickboxing expert. They get recognition, they get money — it’s a win-win situation,” says Kumar.
He is also quick to point out that the freestyle form is far safer than even boxing. “More people die during boxing. There have been no deaths due to MMA. And I think such events just give these fighters more hope that they can make it. Look at how the crowd reacts.”

The well-dressed, well-heeled crowd did seem to be getting the hang of it — thanks to the food counter, the DJ who just would not give up, the freedom to bring your own booze, and then the freedom to boo or cheer your favourite guy in the ring.
Inside the ring, the action was not limited to the fighting — there was a miniskirt-wearing blonde who walked out with plaques signalling rounds 1, 2 and 3, and a mad hatter MC who kept the madness going with some funny and some seriously unfunny one-liners.
Twenty-seven-year-old Ratan Ginwalla, who heads an advertising agency in Juhu, had come to the event with a bunch of colleagues and was surprised at the ‘underground’ feel. “I have seen professional fights in Vegas and to have it in Mumbai is simply out of the world. The first few rounds were a bit thanda (dull), as I think the fighters were not getting too violent. But when the bloodbath began, it was fun. The men were going “kill him, kill him” and the women cringing. I would give up a night at a club any Saturday for this.”
We do not know which women Ginwalla was looking at because not all of them were cringing. Shalu Wadhwa, who works for the event management company Wizcraft, says, “I got some booze and it was rocking!”
Wadhwa had been unsure about attending what she described as “a guy thing”. But once she got here, she lost herself in the action. “The crowd was so good. And the blood didn’t turn me off. Don’t we see worse on television? It’s such an alternate entertainment experience. Mumbai needs it. My only grudge? Why don’t the fighters look like Brad Pitt or Edward Norton?”
THE FIGHTERS may not have even seen Fight Club — the movie Wadhwa is referring to Aslam Nabilal Nadaf, 23, is one of the fighters. He is a BCom student from Sangli, and he assures us he is just doing it for the rush. “It’s so different, and the audience makes it electric. Maza aata hai (I have fun),” he says just before stepping into the ring. But Aslam didn’t get to feel the rush for too long. His shoulder got dislocated in the first five minutes and he tapped out of the bout.
Businessman Nirav Shah who got his 11-year-old son to the fight was glad for all the drama. “That’s what makes it fun. It’s a sport as well and it’s great to encourage it. I was not sure my son would like it, but now he wants to bring all his friends along next time. And it’s not bad for him — kids today know everything.”

Shalu Wadhwa had been unsure about attending what she described as a guy thing. But once she got there, she lost herself in the action

It was a unique night. A crowd that included families, couples, kids and a smattering of expats, all got together to drink, eat and enjoy watching a sport that many would consider brutal.
Was it a hit just because Mumbaikars are starved of live events that excite the senses, or does an event like this feed the sadistic sides of our personalities?
Private investor Tarbir Shahpuri, 28, does not care why but is just glad he was there. “It’s not about the fights, it’s about the experience of feeling like you are doing something different. Thanks to the 500 entry, the people you did it with were also sophisticated,” he grins, adding, “But most of all, it was an intense event. And god knows, Mumbai needs the intensity.”
aastha@tehelka.com 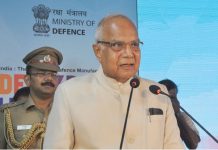