It is often stated that the past cannot be really buried, but it is considered a good advice that to bury the past to move forward. It was a saner approach, when on the debris of the World War-II, the European Union was formed. However, with growing prosperity, the old rivalries among the nation states are now haunting the Europe. Its unity is being threatened. In 2020, the movement, Black Life Matters (BLM) had resurfaced in USA threatening the existence of the world’s only super power as a nation. The saner political initiative, however, has saved the day for USA.  The fragmentation of Canada as a nation, perhaps, could be prevented by adopting a comprehensive plural approach. The challenge before the new generation of the Canadian state is how to bury the old prejudices among the descendants of the two most prominent colonial powers of Europe — British and French — to weave a united country committed to the welfare of its citizens irrespective of language, faith and race or ethnicity.

Since its enactment in 1969, the Official Languages Act has had many positive effects across the country. It has established institutional bilingualism and, in so doing, has allowed Francophone to access services in their language throughout the country and career opportunities within the federal public service. It has resulted in the emergence of a new generation of official languages: young people have been able to be educated in the official language of the minority. It has protected the rights of official language minority communities and ensured their vitality. Another revolutionary step was taken in 2019 with the Indigenous Languages Act. It is expected to help the Canadians to form a mosaic of cultural identities in a plural society. It is expected to evolve a pan-Canadian identity having strong individuality of each minority group.

The present day Canada having the majority of the British descendants is trying to assert as a united nation having equal stake holders whether they speak English or French. With just a population of less than 10 per cent of the French speaking people in various parts of Canada, French is being used as the official language. This bilingual approach is expected to discourage the resurfacing of   the colonial era rivalries among their descendants of the two European powers – Britain and France. There is a deliberate effort among the new generation people that they must shed off the past of their seniors to form a powerful all-inclusive nation state in a far off land, Canada across the turbulent, Atlantic Ocean.

In the contemporary world, both Britain and France do not enjoy their respective pre-eminent roles they have had during the colonial era. However, USA has emerged as a super power having the majority of the British descendants. Its strength, however, could be attributed to its secular all-inclusive polity. The issue is whether Canada, which was once called the New France, could assimilate its migrants having different ethnic, religious and language backgrounds. The New France was ceded to Britain in 1763. It was done following the end of the Seven Years’ of War, when France, Britain and Spain ratified the treaty of Paris. The French had to surrender their North American possessions, including Île-Royale or Cape Briton Island, Canada and the Great Lakes. 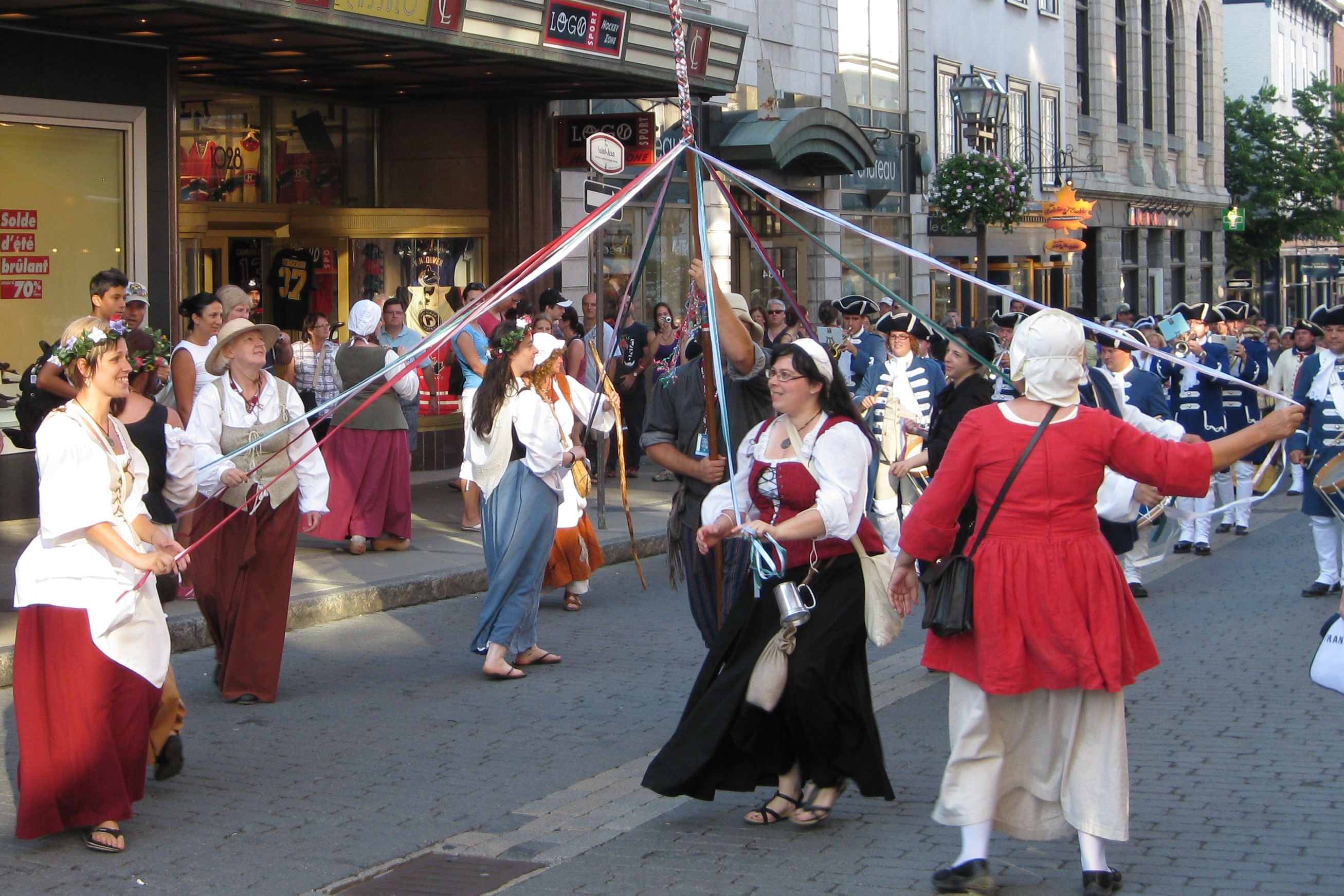 During the past 250 years, the immigrants from France have contributed as professionals and entrepreneurs. The people from the British Isles outnumbered the French settlers, but their presence remained quite strong due to their contributions in the country’s economic and social life. Most of them were settled in Canada’s big cities. They set up cultural associations and the French-Canadian schools contributed to education. During the 19th century, most of the migrants from France were a few clergy members, farmers and professionals. The French presence in Canada, however, has increased during the post World War-II, especially following the brief German occupation. Earlier, the British colonialists had encouraged French clergies, though they belonged to a rival religious sect – Roman Catholics, to settle down in Canada. These religious preachers might have traveled to Canada amidst the ongoing French Revolution and the secular politics in the home country. It is estimated that at least 2,000 Catholics found a safe refuge in Canada. The arrival of these religious settlers enabled the French-Canadian Church to increase the number of French-Catholic schools, colleges, hospitals, orphanages, co-operatives and associations.

In Quebec and other areas, where the French migration took place, it was the Church that founded modern institutions. Between the mid-19th and mid-20th centuries, religious colonists built and ran most of the colleges and hospitals serving Canadians. These bilingual schools catered to all sections of the people. In later years, these French migrants could establish ties with their home land, France. In 1859, a French consulate in Quebec City was established.

Interestingly, the British colonialists, apprehensive of the takeover by USA, also welcomed the French. The French, though just six per cent of the population in the Prairies in 1921, have made a strong alliance with the English speaking majority. This blending of the people having different linguistic background could make significant mark on parishes in the Prairies more than those in Quebec and Acadia. In coming decades, the French presence was much more noticed with the new arrivals from France, Switzerland and Belgium. Their presence impacted with the publication of newspapers on French and broadcasting stations. The prominent publications included the Patriote de Ouest, theatres, the Cercle Molierre and radio stations. In Quebec, a Jew of Alaska, Jules Helbronnerm became head writer at La Presse and chaired the Royal Commission on the Relations of Labor and Capital in Canada.

The demand for the teaching of the French language and its use in administration became much more pronounced since  1912, when in Saskatchewan, Raymond Denis worked in the Franco-Canadian Catholic Association to recruit francophone teachers and successfully opposed the restrictions on teaching in French that had been announced by the government.

During the past 110 years, the European settlers in Canada have been consciously trying for cementing, preserving and encouraging harmonious relations between French Canada and English Canada. In this connection “English” Canada means all the population, whether of British or other origin, that speaks English. The French issue is focused in Quebec and Ontario. The problem however is Dominion-wide. A considerable minority in Quebec, nearly 20 percent of the 3.3 million in that province, are English Canadians. French Canadians form considerable minorities in every other province except British Columbia. Interestingly, in spite of not being encouraged, French is the native tongue of three out of every ten Canadians.

Proud French’s no to assimilation

The French being deeply committed to their rich cultural traditions have successfully thwarted the assimilation. It was out of the question. The French did not go to Canada to be Anglicized. They went there to live as French men under the French flag. The history of Canada as a French colony is almost as long as that of the United States as republic. Therefore, it is now being realized that the time has come to take stock of the language situation in Canada, to acknowledge the evolution of official languages over the past 50 years and to take action to address the challenges they face. It is also being noticed that with the play of the market forces, there is visible decline in the use of French in Canada.

The existence of Canada will remain threatened unless the Canadian facilitate Francophone immigration outside of Quebec. It is being realized that communities, English-speaking in Quebec and French-speaking in the rest of Canada, are entitled to strong institutions, supported by and for them, that ensure their vitality and sustainability. The federal government has to play a leading role in bilingualism. The judges appointed to the Supreme Court must be bilingual; the role of the media should be of a cultural institution. The demand for the bilingualism, though many consider may lead to the partition of Canada, but it might help in empowering the citizens to believe in Canadian unity.

The threat to the unity is the perception that the French, especially people of Quebec are being discriminated against. During the past two centuries they were treated like second-class citizens. It is yet to be seen, whether the minorities could be encouraged to use their own language and get jobs in key areas on that basis. This is expected to strengthen Canadian nationalism. The official recognition of two official languages in Canada, just like the policies on multi-culturalism that were to follow in the 1970s and 1980s, and the Constitutional Reform Act of 1982, has strengthened Canada as a nation. However, some ultra pro-English people consider it a threat to Canada’s unity.