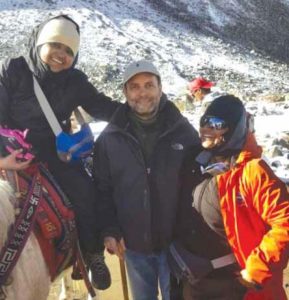 Four visits to Pashupatinath Temple in Nepal by Prime Minister Modi between July 2014 and August-end 2018 and the Congress President, Rahul Gandhi’s proclamation of himself as devotee of Lord Shiva and hi current visit to Mansrovar, have brought focus of political discourse on Lord Shiva on the pattern of Lord Rama, the beginning for which was made by the BJP by the fag end of the 1980s, culminating in the demolition of Babri Mosque and launching of the movement of building Ram Temple at the demolished site in Ayodhya in UP.

The BJP has reaped immense political dividends from the Ram Temple movement irrespective of the fact that the issue of construction of the temple is still mire in controversies and currently it is pending before the Supreme Court for final decision. The Congress president has declared himself as an ardent devotee of Lord Shiva and this adds to his credentials as a devout Hindu. Congress has seemingly adopted the strategy of the BJP by harnessing religion for political gains and enhancing its Hindu credentials.

According to the Puranas, the holy month of Shravan is considered very auspicious to pay obeisance to Lord Shiva during this month. It was during the month of Shravan that the proverbial Samudra Manthan or churning of sea occurred wherein Lord Shiva had to wear a crescent moon on his head due to the grave effects of the poison that he swallowed and all the other gods began pouring water from the holy river Ganga. This was done to reduce the effect of the poison on Lord Shiva. Since then it has become a religious ritual to offer holy Ganga water to Lord Shiva during the holy month of Shravan. It is believed that performance of this ritual, apart from removing away negativity, helps in fulfilling one’s wishes.

Prime Minister Narendra Modi has paid four visits to Pashupatinath Temple in Kathmandu, Nepal. Soon after taking over as prime minister, PM Modi paid a visit to Pashupatinath temple on 12 July 2014 and second visit took place on 5 August 2014. In other words, he visited Pashupatinath Temple twice in 2014. His third visit to the temple took place on 12 May 2018, after a  gap of three years, and incidentally, it coincided with the state assembly elections in Karnataka. Some critics lamented that Modi was more interested in using his pilgrimage to Hindu shrines in Nepal just ahead o Karnataka assembly polls as a photo opportunity  during the silent period before voting rather than addressing the grievances of the people of Indian origin in Nepal.

Last days of the month of August 201 witnessed Nepal hosting the Bay of Bengal Initiative for Multi-Sectoral Technical and Economic Cooperation (BIMSTEC) Summit, in which India was represented by Modi On the sidelines of the Summit, PM Modi utilized the occasion to visit Pashupatinath temple on 31 August, 2018. Interestingly, PM Modi has visited the temple twice in 2014 and twice in 2018. Some critics have opined that keeping in view the ensuing state assembly elections in Chhattisgarh, Madhya Pradesh and Rajasthan, three BJP-ruled states crucial for the BJP, PM Modi’s visit to the temple assumes significance as it did happen in May 2018 at the time of Karnataka assembly polls.

For past some years, the BJP has been raising hue and cry over Rahul Gandhi’s credentials as a Hindu. This hue and cry was raised to the highest pitch during the November-December, 2017, assembly elections in Gujarat. During the closing part of November 2017, Rahul Gandhi was embroiled in a controversy after his name was listed in the temple book at the famed Somnath shrine as ‘non- Hindu’. As per the tradition of the temple, non-Hindus have to enter their names in the temple book. The book showed the names of Congress leader Ahmed Patel and Rahul Gandhi. In order to clear the air surrounding the controversy, the Congress spokesperson had to clarify that the alleged goof up was made by mistake by Congress media coordinator Congress spokesperson asserted that Gandhi is a Hindu and a Shiv Bhakt.

A day after the controversy broke out over his religion, Congress vice-president Rahul Gandhi said he and his family members were ‘Shiv Bhakts’ (devotees of Lord Shiva) but asserted that he did not want to use his religion for political gains. In order to allay apprehensions about his religion, Rahul Gandhi said on 1 December 2017: “My grandmother (late Indira Gandhi) and my family are Shiv Bhakts. But we keep such things private. We generally do not speak about them. Because, we think it is a very personal matter and we don’t need anyone else’s certificate about it. We don’t want to commercialize this thing. We don’t want to do ‘dalali’ over it. We do not want to use it for political purpose too.”

Rahul Gandhi is undertook the Kailash Mansarovar Yatra in accordance with a wish he expressed in April this year when his plane plunged hundreds of feet during the campaign for the Karnataka polls. According to media reports, the pilgrimage, aimed at seeking the blessings of Lord Shiva for prosperity and success of the country and its people, will take about 12 days.

It is worth mentioning here that in 2015, just after the Uttarakhand floods Rahul had undertaken the Kedarnath yatra on foot to once again flaunt his Hindu credentials. The internal assessment undertaken by Congress in the aftermath of its debacle in 2014 elections had reportedly convinced it that its minority appeasement had boomeranged on them with disastrous results, hence the course correction. According to some experts, Rahul is trying to send a larger message of being a devout Hindu as part of his strategy of soft Hindutva.

Religion has seemingly become an integral part of contemporary political narrative in India and every political entity is ostensibly trying to woo Hindu votes by declaring itself as a devotee of one god or the other. In other words, there has begun a race for exploiting religion for political gains and this tendency bodes ill for the future of democracy in the country. There seems to be no going back from this in the foreseeable future because the level of electioneering is getting worse election after election. Healthy political competition is missing.

The Supreme Court’s judgment at the cusp of 2017 that religion and caste cannot be used by politicians seems to have fallen on deaf years. Electorate in India have been divided and ruled by politicians playing the caste or religion card for many decades. Caste and religion have wreaked havoc with our politics and country. This has neither benefitted the religion nor the caste but the people have fallen an easy prey to these tentacles that entail the potential of killing the democracy and tarnish India’s name as the largest democracy in the world.

Undoubtedly, India has moved into the 21st century not only as a rising power but as a truly secular nation; nevertheless, overwhelming of religious forces over democratic forces is likely to continue in the 2019 elections and occurrence of such an eventuality could be detrimental to India’s future.