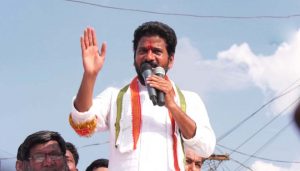 Revanth Reddy, a Congress Working President in Telangana was detained by the state police on Tuesday, ahead of Chief Minister K. Chandrashekhar Rao’s election rally in Vikarabad district.

Reddy was picked up from his residence and taken into preventive custody early on Tuesday, to prevent any untoward incident during Rao’s rally in Kosgi, Kodangal.

He was later shifted to an undisclosed location.

“It’s highly condemnable that Telangana Police arrested Congress Working President & Kodangal MLA Revanth Reddy at 3am today because CM K. Chandrasekhar Rao is holding a rally there. We appeal to EC that such intimidation goes against the spirit of free & fair elections,” DK Shivakumar tweeted.

Revanth Reddy, who quit the Telugu Desam Party (TDP) to join the Congress earlier this year, represented Kodangal in the dissolved Assembly.

His detention came in view of Reddy’s threat to stop a public meeting of caretaker chief minister K Chandrashekhar Rao in the constituency.

The Election Commission (EC) had also issued a notice to Reddy for his threat.