This was KCR’s first meeting with Modi after being sworn-in for a second term as Chief Minister.

Rao discussed variety of issues with the prime minister, including release of funds for 10 backward districts, Pradhan Mantri Gram Sadak Yojana proposal, expeditious completion of railways projects, setting up of a separate high court for Telangana, Kendriya Vidyalayas in new district and an IIIT in Karimnagar district. 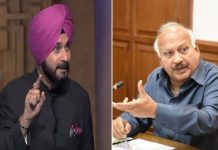