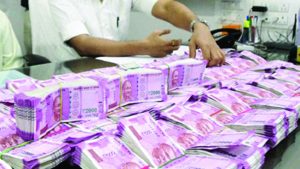 A shocking message recently surfaced on social media platforms, which claimed that Reserve Bank of India (RBI) is taking back all the 2,000 denomination notes. The message also claimed that this was being done due to the alleged introduction of a new 1000 bank note.

Tehelka decided to find out the truth and to unearth the fake news, which said, “a top bank was asked to replace all 2,000 notes in its possession to currency chest”. It further claimed that third party ATM service providers have been instructed to replace 2000 note cassettes in ATMs with cassettes of the new 100 notes at multiple banks including in the private sector. The directive came after employees at the bank were reportedly issued instructions from the Central Bank to not to reload Rs 2000 notes into ATMs.

A written reply by Anurag Singh Thakur, Minister of State for Finance & Corporate Affairs to a question in Rajya Sabha whether the Government is contemplating to stop circulation of the 2000 notes in phased manner, clarified, “there is no such proposal with the Government. Citing the Annual Report of the Reserved Bank of India, the Minister further stated that the share of value of 2,000 denomination banknotes in circulation (6,582 billion) to the value of total Notes in Circulation (21,109 billion) was 31.18 per cent.

The Minister of State for Finance and Corporate Affairs, further informed, “An analysis of the search cases, conducted by Income Tax Department (ITD), involving cash seizures of more than 5 crores in the last three Financial Years reveals that there is a declining trend visible in the seizure of unaccounted cash in denomination of 2,000 notes. The percentage of unaccounted cash seized in denomination of 2,000, out of the total cash seized is 67.91 per cent, 65.93 per cent and 43.22 per cent in Financial Years 2017-18, 2018-19 and the current financial year, respectively”.

Going by the Reserve Bank of India (RBI)’s annual report for 2018-19 and a recent RBI query, there is no doubt that the printing of new 2,000 notes has halted altogether in the last 18 months. To make matters complex, the RBI has not issued any public notice to let stakeholders know why the printing of 2,000 denomination notes has been halted. It has also not specified any reason or clarified if indeed the printing has been stopped indefinitely or for the time being. In the absence of any tangible information from the RBI, the market is attributing it to hoarding of high value notes by certain elements.

Ever since Prime Minister Narendra Modi announced the demonetization of 1,000 and 500 notes in 2016 and issued  large number of 2000 notes, every now and then, rumours have spread regarding the withdrawal of the new 2,000 notes as well. Several messages and reports are currently doing the rounds on social media suggesting that the Reserve Bank of India has “decided” to recall 2000 notes and roll out 1,000 notes starting January 1, 2020.

What led fuel to the fire was a tweet by Economic Affairs Secretary, Subhash Chandra Garg which said, “A good chunk of 2000 banknotes, which account for approximately a third of India’s currency notes by value, are actually not in circulation but have been hoarded.” He also suggested that such high-value notes could be banned without any objection.

The message doing the rounds stated that citizens would not be able to exchange their 2,000 notes. It also states that only up to 50,000 of 2,000 notes can be exchanged. The circulation also states that the 1,000 notes would be in circulation soon. The Press Information Bureau took to twitter to debunk the claim. The reality is that there is no such announcement by RBI and the one clear-cut conclusion is that viral news of roll back of 2000 denomination notes by the RBI is nothing but “Fake News”.