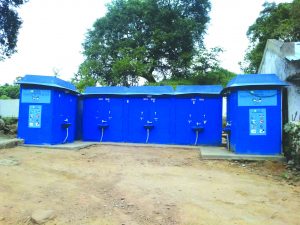 To meet the basics of life, Boduvalasa village, 21 km away from Visakhapatnam in the state of Andhra Pradesh has come up with a solution to access clean water and sanitation system.

A non-profit organisation called SANA has come up with the idea of using technology for social impact in Boduvalasa.

Before SANA setup the ‘Solar power compact water purification station and bio-toilets’ in the village, people were depended on the borewells water and few community toilets provided by the government.

Laxmi, sarpanch of Boduvalasa village spoke about the benefits of the integrated water and sanitation system, said, “Earlier we use to drink bore-well water, which had many health side effects. People had to suffer various stomach and waterborne diseases. Now we don’t have to face such problems.”

A total of 1,500 houses in Boduvalasa are totally depended on the water purifying stations to meet their regular drinking water needs. This water station has changed the life of the people in the village as they don’t have to ‘walk miles to get water’; instead, they have access to clean water along with bio-toilets which has eased their life a bit.

Talking about the necessity, Laxmi said, “No one in the village has to worry about clean water anymore, even people from the nearby village come to our village to get drinking water.”

The water purifying stations have also brought some short of employment options for the village people. Laxmi told that there is a very high demand for clean drinking water in the village.

“Every day, we produce almost 800 liter of drinking water. We sell one-liter drinking water at 25 paisa and 5 for 20 liters and we use the money for maintains of the water station, paying the local operator and for toilet cleaning purposes.

B Pydapu Naidu, the principle of Zila Parishad High School (ZPHS) in Pendurthi city in Andhra Pradesh has a similar story to tell.

According to Naidu, water stations have been very useful to the school. He said, “Our school is situated in a rural area and we have more than 1300 students. The students have faced a lot of problems because there was no purified water available in the school, except borewell water which was the only source of drinking water. It has caused regular sickness among school children but the situation has improved now.”

SANA has set up a water purifying station in the school itself and 20 bio-toilets for girls. Before this project, there were only 20 toilets for more than 1300 students. Talking about the bio-toilets, Naidu said, “Earlier, the numbers of toilets were not sufficient but now we have in total 40 toilets, 20 of them are bio-toilets which is sufficient. The children have got most of the benefits from both projects, specially the girl students are benefited.”

The establishment of bio-toilets and water purifying stations has also increased the attendance of students in the school. “Normally, we produce 2,500 liter because attendance has increased. As the students have clean drinking water at school, they take water at home.”

The school doesn’t sell water but allow the student to take it home if they attend classes. As informed, parents are not allowed to take drinking water if the student is absent.

ZPHS in Pendurthi city provides resident to almost 250 students and most of the students come from nearby villages.

A 10th standard student, Bindu, who walks almost 2-3 kilometers to ZPHS every day shared her part of being benefited by the water purifying project and bio-toilets, said, “I come from a nearby village. We don’t have clean drinking water resources at home. The water station at school is very useful to me and my fellow batch mates.”

She further said, “Drinking borewell water caused us many waterborne diseases. And the bio-toilets are lifesaver as they are very clean and accessible.”

The organisation came up with this idea of using technology to improve water and sanitation infrastructure for rural villages in the year 2013. The Google Impact Challenge winning idea of SANA was to provide clean drinking water and build bio-toilets by building Solar power compact water purification station which will purify local water resources.

Sanchaita Gajapati Raju, founder of SANA talked about her vision behind the project, said, “When I talk about water and sanitation — these are the building blocks for any kind of growth, development, sustainable future of our society and it is mostly about restoring human dignity.”

The intention of the organisation is towards bringing a consistent impact in the society drives from its ideology that ‘technology can be leveraged to transform lives.’ It also concerns women empowerment as the initiatives; water purifying stations and bio-toilets has brought a positive change in the life of many women in Andhra Pradesh.

The grassroots reality shows that most of the ‘girls have to drop out of school due to lack of safe toilets and women are mainly responsible to ensure availability of drinking water at home for which they had to walk miles.’

“We take help of local district administration to navigate the local grassroots reality. You need to understand the ground situation to make a meaning full impact,” informed Sanchaita.

“Looking at the grassroots reality in rural villages, we have designed our project. We decided to build water purifying stations by using whatever raw water source available for use, such as, pond, lake, well, etc. And we used the wasted water from the purifying process for washing and flushing in bio-toilets,” she added.

The water stations are run by solar power which makes it an environment-friendly project. Explaining the whole technical process of the ‘Solar power compact water purification station and bio-toilets’, Sanchaita said, “Our aim was to make it a sustainable and green project. A huge amount of water gets wasted in the purification process. Bio-toilets need zero human intervention and it is green. That’s how we create a loop of zero water waste.”

SANA has now approximate ‘40 water purifying station running in a different village in Andhra Pradesh’. It has received a welcoming approach from the locals as the whole water station is handled by the locals itself once it was setup.

Sanchaita sees the success of the project in the participation of the locals. She said, “You have to keep in mind that locals are involved because it is not business, it is for people. The success of our project is totally based on the social impact we create.”

Water is a synonym to life and a healthy life demand a safe environment to live. And, with the help of technology, villages like Boduvalasa in Andhra Pradesh could set an example for the rest of India. If access to clean water and bio-toilets could bring change in Bindu’s life then it could impact many more like Bindu in different parts of India.