The fifth round of talks between government and the farmer union leaders ended inconclusively on Saturday with the latter resorting to a silent protest holding up placards that said yes or no on their key demand of repealing the three new farm laws.

The next meeting will take place on December 9.

According to the sources, the government asked for some more time to come up with a concrete proposal.

Several farmer union leaders said they do not want anything less than the complete withdrawal of the laws.

Addressing farmers at Singhu border, Dosanjh said, “I have come here to listen not speak. Thank you to the farmers from Punjab and Haryana. You have created history once again.”

He further said he had only one request to the Centre to fulfil the demands of farmers. “Everyone is sitting here peacefully & the entire country is with farmers,” he added.

During the meeting, Union Agriculture Minister Narendra Singh Tomar appealed to the farmers to send back senior citizens and children to their homes from the protest sites. 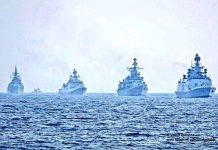