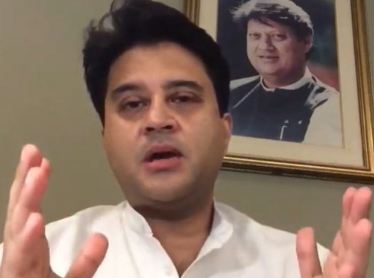 Member of Parliament Jyotiraditya Scindia who defected to BJP from Congress earlier this year took a jibe at his former party on Sunday after the tussle between Rajasthan’s Deputy CM Sachin Pilot and CM Ashok Gehlot intensified.

Scindia in a tweet said, “Sad to see my erstwhile colleague, @SachinPilot too, being sidelined and persecuted by Rajasthan CM, @ashokgehlot51. Shows that talent and capability find little credence in the @INCIndia.”

This came after Sachin Pilot on Sunday openly rebelled and claimed that he had the support of 30 Congress MLAs and some independents in the state assembly. Pilot also made it clear that he will not attend the Rajasthan Legislature Party meeting scheduled for Monday morning.

Rajasthan Chief Minister Ashok Gehlot has blamed the BJP for attempting to topple the state government by poaching MLAs.

The 200-member Rajasthan assembly consists of 107 Congress MLAs and has the support of other 18 MLAs, taking the party’s tally to 125, whereas the BJP has 72 MLAs and is supported by three MLAs of RSLP.