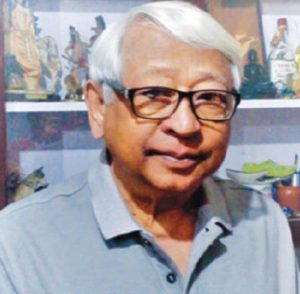 Eugene Lawrence’s “The Lacquered Curtain of Burma” is an uncanny amalgam of fact and fiction. Eugene says that “a discerning reader can easily sift the fact from fiction”.

But what about such readers who are not so discerning?  While the portrayal of some of the major players in the story is true to life, that of few others is altered and even suppressed, and some are purely fictional.

In a way, the Book tells the reader how the colonial Britain’s conquest and the Japanese occupation of Burma during the World War II shaped the historical, socio-cultural, religious and political landscape of the country. Though the author sincerely tries to adhere to facts, he nonetheless occasionally takes a detour in order to suit his storyline. The Lacquered Curtain is thus a colourful cameo both of Indians who had migrated to Burma from the then British India and the Indians who had arrived there with the Indian National Army of Netaji Subhash Chandra Bose, accompanied by the victorious Japanese Forces.

The book depicts the upheavals that those two momentous events had then caused among the Burmese, Indians living in British Burma and the Indians of the INA, depriving them of their peaceful livelihood. It also recounts in-depth how the Burmese struggled for independence both from colonial Britain and the Imperial Japan. What had further worsened the situation were the post-independence conflicts between the majority Burmese and the ethnic minorities, particularly the Karens. And to top all that was the military coup of 1962, and how the courageous and as yet inconclusive movement by Sau Suu Kyi for democratic change has continued unabated between the regimes of successive military juntas after that coup?

The story actually begins with Stanley (an Indian) abandoning his native Calicut at age 18 in search for greener pastures in Singapore, his medico sister funding his passage. It was there that his singing talent blossomed, but the money that he earned was not enough to make ends meet. So as per the advice of his Chinese friend Frank, he became an independent salesman of sort. In due course, Stanley’s business flourished. His next destination was Malaya (now Malaysia). He tied up with an Australian company to distribute potatoes in Malaya. But all those good days soon ended when the Japanese reached Malaya with stunning speed, mauling the hastily retreating Allied Forces with a savagery unparalled in the recent history of ‘human primitivism’. The Japanese carnage, in a way, turned into a blessing for Stanley who per force became an interpreter with them. And soon thereafter Stanley joined Subhash Chandra Bose’s Indian National Army (INA). And after the defeat of the Japanese in Burma, Stanley and his band of eight INA men surrendered to the victorious British Forces.

To cut short the long story, Stanley married Dora, daughter of a relatively well off ethnic Karen. In due course, Dora and Stanley became the parents of six children, the author Simon being the oldest and lived a content life; however, when Nationalization began in Burma in February 1963, particularly targeting the Indian banks and even small Indian businesses, the family returned to India in 1966 as refugees.

A fascinating book, indeed. The protagonist Stanley comes out as a man of much courage and ingenuity, and wins the hearts of the readers. A must read for those interested in Burmese history and the political cross-currents in the context of South East Asian landscape.