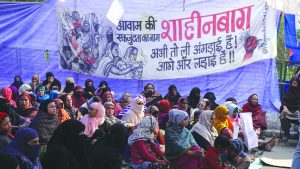 In all these years and hundreds of visits to Delhi from my hometown Lucknow, I do not remember ever hearing the name of Shaheen Bagh, forget about visiting the place ever. But this time when I planned my Delhi trip, a visit to this women exclusive anti-CAA & NCR site was a top priority for me. Apart from the journalistic curiosity the women in me was also eager to see. this all inclusive woman stir. Driven by a common cause to ensure a fair playing field for all Indians, I wanted to meet these women, most of whom had never ever crossed the threshold of their dwelling alone and gauge their pioneering spirit.

It was 31st January, 2020 46th day of their 24 x 7 peaceful protest in the cold, harsh winters of December and January. I shuddered at the thought as I set off on my 20 km trip, from Preet Vihar. The mode of transport included a three wheeler, followed by an e-Rickshaw ride and ending with some distance covered on foot, Huge Traffic snarls, holdups, poor roads and biting cold breeze made the drive tough. It took almost 90 minutes to reach my destination Shaheen Bagh .

I was disappointed there was no bagh (garden) At first sight it appeared a desolate and neglected road. After crossing a stretch of police barricades I had to walk for a few minutes before  I arrived at the site. Demarcated by thick ropes, around which stood men folk some listening to the speaker inside the cordoned off area supported by wooden poles on which rested colorful tarpaulin under which sat hundreds of women- of all ages and strata. The sun kissed winds were cold enough to make me dig deeper my hands in my coat pockets I shuddered to think how these women must be copying with the dipping mercury in the night.

Making way through the crowd, lifting the rope that separated the protestors from the by standers I stepped in. Nobody raised an eyebrow, they continued to listen to the speaker who was saluting their commitment to the cause and at the same time cautioning them to be alert and secure. The women clapped periodically, giving full attention to the speaker. The infants and older kids mingled in the crowd. Some joined their father and older siblings standing outside the enclosure. The women, most of them from adjoining areas of Shaheen Bagh seem to know each other, the majority of women I spoke to were chiefly house wives but there was a sprinkling of students, teachers and a few medicos too in the crowd. They seemed like one big family. There was no rush no chaos instead there was a calm all around.

In a heap were piled the beddings that would be spread as the sun set in. In  noticed a charpoy on which an elderly lady was sleeping..

“Yeh daadi thak gayee hain, rest kar rahee hain (this grandma is tired she is resting), said the lady sitting close by, Indian flag colors displayed on her headscarf. Alongside on the front bench sat some elderly ladies- the dadis (grandmas) of the protest. Noor Nisa, Aasma Khatoon, Waheeda all in their late seventies -they have all been with the protestors right from day one.

“Yeh humharey baccho key mustaqbil ka sawal hain humey to aagaey aana hi tha.,” (this is the question of the future of our children, we had to come forward), said 75 year old Noor Nisa. According to her the Black Law will endanger their future in a country that has been their home for generations and that is why they it is important that they  fight till their last breath for the roll back of the law.

Sabiha sat amongst the protestors a Tricolor round badge pinned smartly on her dupatta. When I pointed towards it she retorted “yeh to dekh raha hain, magar jo Taranga dil may hain who Modiji ko kaisey dikhaaey,” (u can see this but how do I show Modiji the Tricolor that is hidden in my heart). Sabiha felt pained at Modiji recognizing rioters through their clothes and cheap rumours of the protesting women paid money for the sit ins.

“Lanat hain aisee sooch per (shame on them for thinking so) she said adding that time will prove who has been paid.‘

A primary school teacher who refused to give her name asserting that  “main Shaheen Bagh hu” said that India is their place of birth and it will be their place of death. She urged Prime Minister Modi and home minister Amit Shah to acknowledge that they have made a blunder and take back the law that will jeoparde the future of the Indian youth.

For shy teenager Shehzadi, a school going protestor this has been an experience of a lifetime. Holding her one year old nephew in her arm, she said she likes being here and knows it is the right thing to because all the  female family members are here and the males in the family are supporting the women on dharna.

My first takeaway — Sense of purpose keeps you warm and spirits up. While the sit in had only women and few male volunteers looking at the sound system, lighting and those helping in food distribution there were men on the fringes of the tents. While kiosks were seen selling eatables and clothing the big shops were all closed down. The shootout at Jamia, just a few km away from Shaheen Bagh in the morning had spread and men could be seen discussing it in groups. Surprisingly there was no fear or chaos and efforts were being made to ensure that normalcy prevailed.

Outside the sit in area was spread all around creativity and sense of patriotism not exhibited so publically before. While a big Tricolor was used in the middle of the police barricade, it was also seen atop trees and on walls. Several innovative makeshift shops, like some on scooters and cycles, shanties and ladders and steps of shops were visible. Flags, along with photos of Dr Ambedkar, Mahatma Gandhi and freedom fighters in all sizes and shapes were available. for a price. Many youngsters and children had the Tricolor painted on their cheeks and forehead.

My Second takeaway: It is important to display your The cynosure of all Eyes -Several feet tall, beautifully crafted cutouts of the map of India at one end of the protest site. This creative space was studded with posters showcasing the. While one poster with showing an old women proclaimed Main Shaheen Bagh hu,” Another one advised the Police of Delhi to take their salary from the BJP while a third one had in scripted the verses from revolutionary poet “hum dekheygay. We the people of India –the preamble of our Constitution was also pasted at several places and so was the CAA details.

My Third Takeaway: Unrest is ideal place for Creative outburst. But what delighted me most was the make shift library started by Persian scholar Mohd Asif and friends. Scores of people could be spotted all around reading or flipping through pages of books .

“We started the library on 17th January with just 25 books, today we have over 300 plus books,” said AsifAccording to Satya Prakash, another student who forms the library core group, the library which  is open 12 am to 12 pm has generated a lot of interest in the people.

While one has to sit and read books at the library space in some cases, especially to females they lent out the books for a day.

Asif said that they have setup a library website and that the enthusiasm of the public has made them decide that the library will continue here even when the dharna is over.

My final takeaway: Some lasting good comes always comes off movements spearheaded for causes My last take away- women power has been grossly underestimated in countries like ours. But the truth is that women empowerment does not flow from Triple Talaq but is ensured when women sense a threat to their family and especially to the future of their children 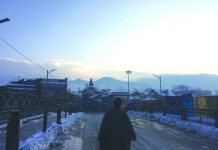