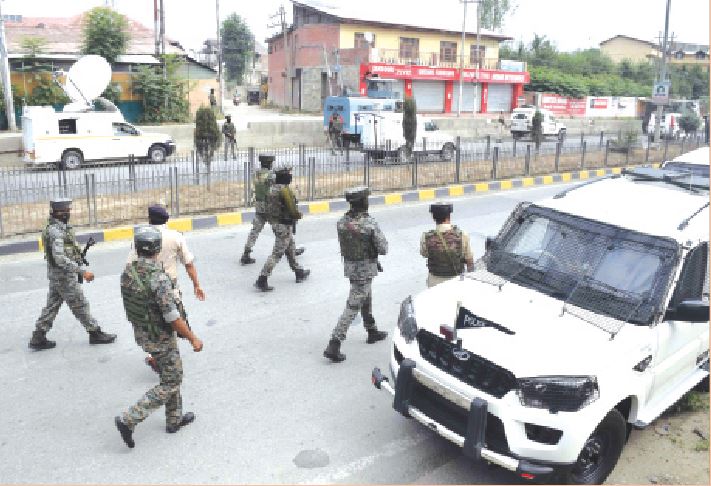 Bang in the throes of pandemic, J&K govt creates a task force to identify ‘anti-national’ employees, reports RIYAZ WANI
In the middle of a raging pandemic, the Jammu & Kashmir Government on April 22 constituted a Special Task Force (STF) to identify and scrutinise the government employees who are involved in anti-national activities. The Assistant Director General of Police (CID), J&K has been appointed as chairman of the force and the IGP, representatives of the Home Department; Department of Law, Justice Member and Parliamentary Affairs and the concerned department are its members.
A notification issued by Commissioner-Secretary Manoj Kumar Dwivedi said the STF will scrutinise cases of employees suspected of activities requiring action under “Article 311(2)(C) of the Constitution”. According to this article, an employee is dismissed or removed or reduced in rank on the ground of conduct which has led to his conviction on a criminal charge.
The task force will compile records of such employees and also engage with other members of the Terror Monitoring Group (TMG) for identifying such other employees. The STF will decide these cases in a time-bound manner.
The move has evoked a sharp reaction from the political parties which see the order designed to harass and suppress the government employees. National Conference has termed the order as an instance of “colonial hangover” and demanded its rollback.
“Such measures might be used against anybody who wounds the vanity of the government or criticises its policies. There is a stark distinction between being anti-national and having an opinion, this diktat obliterates such distinction,” said the NC leader and the Member Parliament Mohammad Akber Lone said. “The new gag provides a handy tool to the higher-ups in the bureaucracy to suppress their subordinates and lower-rung officers on unjustified excuses. Having such a measure in place in a functioning democracy is uncalled for. Such a law was not required in the first place because there are already service rules that deal with such employees as are involved in any unscrupulous activity”.
The PDP was harsher in its reaction: “Even as India gasps for breath thanks to GOI’’s inept handling of COVID, it’’s paranoia about Kashmiris has touched a new low with social media of government employees now being monitored. The vengeance with which J&K’s special status was scrapped doesn’t seem to have an end in sight,” Mehbooba said in her tweet.
People’s Conference on the other hand expressed serious concern over the establishment of Special Task Force to terminate the government employees without any inquiry, terming such an order traumatising and humiliating for the government employees.
“The decision to create a task force and terminate a government employee without an inquiry looks frighteningly draconian and shocking,” the PDP leader Khurshid Alam said. “Even the people who commit the heinous crimes were given an opportunity to defend themselves and present their case”.
The order is designed to ensure that the government employees don’t criticise the official policies on social media or show support for separatist activities. However, it is the issuance of the order bang in the midst of Covid-19 pandemic that has puzzled people in Kashmir. This is seen to reflect the misplaced priorities of the government.
“Whatever the rationale for the administration to create such a force, this time the Covid-19 crisis should have been the focus of its attention,” read an editorial in Kashmir Observer. “A task force should have been created to enforce Covid-19 Standard Operating Procedure in public life, to ensure our medical facilities are sufficiently equipped and staffed to meet the challenge. But that doesn’t seem to be the priority as of now. A tiny number of allegedly anti-national government employees are”.