External Affairs Minister Sushma Swaraj on Tuesday declared that she will keep herself out of the 2019 Lok Sabha elections, citing health reasons.

Sushma Swaraj, 66, announced her decision at a media interaction in Indore.

“It is the party which decides but I have made up my mind that I will not contest the next Lok Sabha elections,” she said.

Swaraj said that she had already conveyed her decision to the party.

Swaraj won Lok Sabha elections in 2014 from Vidisha parliamentary constituency in Madhya Pradesh by a margin of more than 4 lakh votes.

In November 2016, the Twitter-savvy minister had posted the news on twitter about her kidney transplant before her surgery. “I am in AIIMS because of kidney failure. Presently, I am on dialysis. I am undergoing tests for a Kidney transplant. Lord Krishna will bless.” 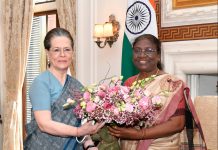