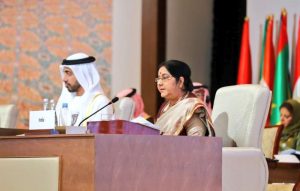 External affairs minister Sushma Swaraj on Friday addressed inaugural session as ‘Guest of Honour’ at council of foreign ministers of the Organisation of Islamic Cooperation (OIC). It is for the first time that India has been invited to an OIC meeting.

Swaraj in her speech said, “I stand here as a representative of a land, that has been for ages a fountain of knowledge, a beacon of peace, a source of faiths and traditions and home to religions from the world and now one of the major economies of the world.”

She further said that terrorism is destroying lives, destabilizing regions and putting the world at great peril. Terror reach is growing and the toll it is taking is increasing.

“Terrorism in each case is driven by distortion of religion. Fight against terror is not a confrontation against any religion. Just as Islam means peace, none of the 99 names of Allah mean violence. Similarly, every religion stands for peace, compassion and brotherhood,” she added.

She said, “terrorism and extremism bear different names and labels. It uses diverse causes. But in each case, it is driven by distortion of religion and a misguided belief in its power to succeed.”

“In the past four years, few relationships have seen as much engagement, or has been so transformed, as India’s relationship with UAE and, indeed, with the entire Gulf and West Asia Region. In a sense, it is a return of history,” Swaraj said.

India shares much with you. “Many of us have experienced the dark days of colonialism. Many of us saw, the light of freedom and the bright ray of hope at the same time. We have stood together in solidarity, in our quest for justice and dignity,” she added.

“This is not a clash of civilisations or cultures, but a contest of ideas and ideals. As PM Narendra Modi has often said, it is a struggle between the values of humanism and the forces of inhumanity,” she said.

Swaraj concluded her address at the Inaugural and said she has come from the land of Mahatma Gandhi, where every prayer ends with the call for Shanti or Peace for all.

Pakistan Foreign Minister Shah Mehmood Qureshi on Friday said that he will not attend a meeting of the OIC in Abu Dhabi due to his Indian counterpart’s presence at the event.

“I have decided not to attend Council of Foreign Ministers as a matter of principle for having extended invitation as a Guest of Honour to Sushma Swaraj,” Shah Mahmood Qureshi said.

India has been invited for the very first time to attend the Foreign Ministers’ conclave in Abu Dhabi, where External Affairs Minister Sushma Swaraj is the “guest of honour”. 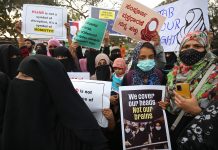