Supreme Court slammed the Centre, the Delhi government and their civic bodies on Wednesday for not taking any step to tackle the “serious problem” of groundwater depletion in the national capital.

The apex court perused the NITI Aayog’s report which said that various authorities were passing the buck and shying away from their responsibility.

“You are doing nothing to reduce water consumption, there is no plan for recharge and preservation of groundwater,” a bench of Justices Madan B Lokur and Deepak Gupta said.

The centre was questioned by the court for immediate, intermediary and long term measure in checking the depletion of Delhi’s groundwater.

On May 8, The Apex court had expressed its concern about ‘over-exploitation” of ground water in various parts of Delhi and asked the authorities to avoid a crisis, saying the situation was “semi-critical”.

It had examined a report filed by the Central Ground Water Board (CGWB) on the status of groundwater level in Delhi from May 2000 till May 2017 and said it indicated an “extremely sad state of affairs” and the situation was serious.

The issue of depletion of ground water came in notice when the court was hearing a matter relating to sealing of unauthorised constructions in Delhi. 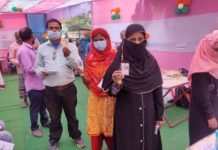