The Supreme Court on Wednesday set October 18 as deadline for completion of arguments in the Ayodhya land dispute case.

The court fixed the deadline after consulting the lawyers from both sides.

CJI said that he is hopeful that arguments can conclude by October 18.

The Ayodhya Bench in the Apex Court is headed by Chief Justice of India Ranjan Gogoi, who will retire on November 17, If the judgment is not delivered before his retirement the entire process will go into restart mode.

“Let us all make joint efforts to conclude it by October 18. If necessary, we are ready to sit on Saturdays or some extra hours on weekdays,” said Justice Gogoi.

However, the top court, last month had said that mediation by the panel had failed to produce a solution. “Mediation didn’t result in any kind of settlement,” CJI had said. 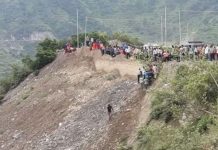