The Supreme Court on Wednesday issued notice to centre on a batch of pleas challenging the Citizenship (Amendment) Act, 2019.

The top court will hear the pleas in January.

The Citizenship (Amendment) Act, 2019, which will grant Indian citizenship to non-Muslim refugees from Pakistan, Afghanistan and Bangladesh, has triggered a massive outrage across the nation.

Several parts of the Country have been on a boil and witnessed violent protests over the past few days.

He asked people not to let what he described as vested interest groups create a divide in society.

PM Modi assured Indians that CAA will not affect the citizen of India. He also underscored that the act was drafted only for those who have faced years of persecution outside and have no other place to go except India. 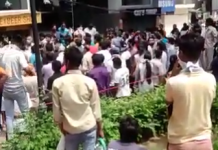