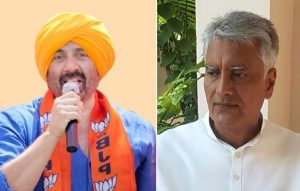 Gurdaspur, May 18, 2019: As the fight between politically novice Bollywood actor Sunny Deol of the BJP-Akali combine and vastly experienced in electoral politics Sunil Jakhar of the Congress in this border area constituency is being perceived to be a close one, the electoral preference of over 3-lakh strong Christian voters is set to be the deciding factor.

Apparently, the elections managers of the main rivals- Congress and BJP-Akalis have worked overtime to woo the community. It is the crucial electoral significance of this community that made a decidedly weaker contender Aam Aadmi Party (AAP) to field a Christian candidate Peter Masih Cheeda. In this scenario, it may be difficult to predict as to which way the community is likely to go yet ground reality has shown a markedly increased political awareness among the community’s voters who mainly comprise farm labourers, sundry daily wagers and some sections employed privately mainly in the health and education fields.

The community members this time sounded well aware of the BJP brand of communal politics in the Modi regime. An exhaustive tour of the constituency’s assembly segments where Christian voters have dominant presence showed a clear anti-BJP sentiment. “We would like to see that Modi does not return to power as we fear minorities are not safe under his rule,” said Mandeep Masih, a resident of village Kaler near Dhariwal town.

Mostly, the community is based in the rural areas having major presence assembly segments of Fatehgarh Churian, Dera Baba Nanak, Qadian, Batala and Gurdaspur City. “The Christian voters are a deciding factor because they vote en masse. Almost 90- 95 percent of them traditionally cast votes whereas votes of other communities are always divided among the parties in fray,” observed Kamal Masih Khokhar, an advocate and the state secretary of the Congress.

How come then the late Bollowood actor Vinod Khanna of the BJP remained four-time MP from this constituency? The answer to this question has to do with the performance of the Modi regime which is being seen as the promoter of the Hindutva politics. “Never before during the time Vinod Khanna contested from here, the communal card laced with anti-minorities sentiment was on display so openly and unashamedly as under Modi rule,” said Tarsem Sahota, another Christian leader who is also the state secretary of the Congress.

Does this mean the Christians will vote overwhelmingly for the Congress? The answer could be: Yes, but with a rider. The Christian voters are swayed by the minority sentiment even as they belong to different church denominations. The community as a whole comprises about 20 percent of the total 15 lakh voters of this constituency. Its includes Pentecostal, Roman Catholic, Church of North India, Methodist, Salvation Army, Seventh Day Adventists and Dera like prayer groups.

Of these Roman Catholic Churches have majority members estimated around 50 and 60 thousand across the constituency. The members of this denomination betrayed a sense of unhappiness with the ruling Congress since one of its priests was falsely implicated by the state police in a multi-crore “illegal” business money case which hit the headlines one and half month ago. The investigations later revealed that about Rs 4.5 Crore were recovered from the two police officials who had “stolen” a part of the money belonging to the company of the priest.

The sense of hurt to the image of this church in particular and the community as a whole is still fresh in the minds of the Christian voters. A prominent Congress leader admitted that this much-publicised case put his party on the back foot. Whether this could work against the Congress or not in what is being perceived as a very close contest from this hot seat, will be seen when the result is out yet this is sure a cause of concern in the Congress camp.

Another ponderable that catches attention is the presence of the young first-timer Christian candidate Peter Masih Cheeda fielded by the AAP. Though on the paper dice seems in the favour of the Congress as it has given most number of party posts to the Christians of this constituency as compared to BJP-Akali combine, yet the religious affinity among the Christians, which seems to have become more crystallised this time as a direct reaction to the BJP’s politics of communal polarization could be the Congress’ loss.

Again given the close contest at hand in which victory margin is being predicted to be small, Cheeda, whatever number of votes he gets, could turn out be a spoiler. It was interesting to see Christian youths belonging to different church denominations backing him throughout his campaign. Though AAP cannot boast of a strong organizational structure yet Jeeda claimed that they have sufficient party workers to represent at about 75 percent polling stations. “I may not win but I am confident of putting up strong enough fight that would decide who will be eventual winner or loser,” he asserted.

As for the BJP, the poll arithmetic in Gurdaspur is in the party’s favour. The party leaders put the number of Christian votes between 1.5 to 2 lakh and this time they are hoping the repeat of Vinod Khanna’s legacy among the Christians. The crushing defeat of its candidate Swaran Salaria in 2018 bypoll at the hands of Sunil Jakhar by a margin of 1.93 lakh votes is an aberration for them. “There is no denying the fact that the Christian votes are crucial but they have traditionally been voting in the favour of the BJP. This is well explained by the winning streak of late Vinod Khanna from here. The voters from all communities see his reflection in Sunny Deol,” said Bal Krishan Mittal, the BJP president of Gurdaspur district.