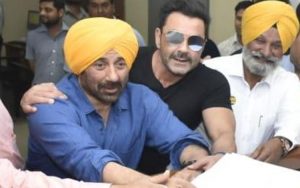 Sunny Deol was accompanied by his brother and actor Bobby Deol.

Veteran actor Dharmendra in a tweet sought support of the people for the victory of his son Sunny Deol.

“We seek your support…Support us…it will be your victory. It (victory) will be of brothers of sisters of my Punjab. It will of India”s beautiful part of Gurdaspur,” Dharmendra tweeted.

Earlier in the day, Sunny Deol offered prayers at the Golden Temple in Amritsar before leaving for Gurdaspur.

The 62-year-old actor joined the party on April 23 in Delhi, in the presence of Union ministers Nirmala Sitharaman and Piyush Goyal. 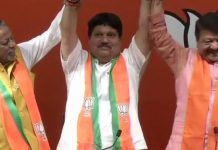