The Aam Aadmi Party (AAP) has been trying to wriggle out of an embarrassing situation it faced due to the controversial remark by its leader, Sukhpal Singh Khaira, for backing the controversial demand for ‘Punjab Referendum 2020’. As the political atmosphere got charged up in Punjab after the remark, Khaira retracted his statement the very next day, saying he was misunderstood for what he had said. Khaira said he did not support the idea of Khalistan. Explaining his statement, he said there is a need to ponder why such demands were being raised again in Punjab. He explained that perhaps this was so because of the result of certain consistent policy of bias against Punjab and Punjabis over issues like water distribution, no punishment to the culprits of the anti-Sikh riots in 1994 etc.

Khaira even attacked both Capt Amarinder Singh of the Congress and Parkash Singh Badal of the Shiromani Akali Dal for backing secessionist demands in the past. He wondered why such a hue and cry was being raised now when in the past no one had condemned Capt Amarinder and Badal on their objectionable demands.

Sensing adverse reaction to Khaira’s statement, AAP tried its damage control measures to defuse the crisis. AAP refused to buy Khaira’s casual denial of the real intent of his remarks on the referendum. Incensed over Khaira’s remarks, AAP leadership pulled him up and he was summoned to Delhi.

According to sources, the party expressed its anguish over his remarks on such a sensitive issue. Khaira’s statement lent credence to people’s perception that AAP supports groups with dubious demands.

AAP party in-charge of Punjab affairs Manish Sisodia demanded a written explanation from Sukhpal Khaira with regard to the Referendum 2020. Displaying his apparent displeasure, AAP supremo Arvind Kejriwal even refused to meet him during his visit to Delhi. Later Khaira issued a statement that he did not support the demand for Referendum 2020.

AAP leadership has not forgotten how the party suffered in the Punjab state assembly polls last year when Kejriwal had stayed in the house of an alleged Khalistani supporter. SAD, Congress and the BJP had raised heckles over the issue during the election campaign and maligned AAP, claiming that it had the backing and the support of the Khalistani elements and was trying to win the poll on the basis of that.

Perception counts a lot in the eyes of the public. AAP’s denial before the Punjab assembly last year that it had any connection with the Khalistani elements had failed to convince Punjab voters who had then overwhelmingly voted in favour of the Congress and AAP could manage to win just 20 assembly seat to be relegated to the position of the main opposition party in the state.

AAP finds itself in a similar situation now. Khaira’s statement has the potential to damage AAP’s reputation in Punjab. Not just the opposition parties, but AAP itself immediately distanced itself from his statement. AAP Punjab’s co-president Dr Balbir Singh declared that the party does not support any Referendum 2020. He said AAP stands for unity and integrity of India. Angered with Khaira’s statement, Balbir Singh said the AAP party high command was planning to take action against Sukhpal Singh Khaira.

Shiromani Akali Dal (SAD), which has ruled Punjab over a number of years, too expressed resentment over AAP leaders utterances on Referendum 2020. A statement issued by SAD spokesman Daljit Singh Cheema said the party was surprised by the fact that even elected over representatives were now talking about Referendum 2020 which attempts to divide the country. “This is an attempt on the integrity and sovereignty of India,’’ said Cheema.

Khaira reportedly was accused of making such a statement to attract NRI support for the AAP and especially overseas funds for the party. No wonder many office bearers and volunteers of AAP’s foreign wings in countries like Canada, US and Europe backed Khaira after his remark. The overseas units demanded action against co-convener of Punjab unit, Dr Balbir Singh, who had attacked and criticised Khaira for his statement. Khaira even found support from the Overseas Wings of AAP. A letter was issued by the Overseas Wings of AAP that said it was sad that party’s own leaders were attacking him instead of supporting the issue raised by him.

Talking to Tehelka, political analyst from Punjab,Dr Manjit Singh, said it was wrong on the part of Khaira to talk of any bias or discrimination against the Sikh community which he had cited as instance why demands for the referendum 2020 were being raised now in Punjab.

“Punjab is a Sikh state on the basis of its majority popularity. Sikhs have been ruling the state all these years. Where is the question of discrimination against Sikhs in Punjab or any other part of the country? Punjab was party to all the previous water accords in the state. It is true that Punjab has to share 8 MAF water to Rajasthan and .02 MAF to Haryana. But water is no single state’s property. It has to be shared. There is no discrimination in this. Sikhs are not persecuted or prosecuted in any part of the country. The demand for a referendum, therefore, does not make any sense at all. Without the rest of the country’s resources, how will Punjab survive if it is created as a separate country,’’ said Professor Manjit Singh.

But as the controversy started to subside, AAP’s suspended MP Dr Dharamvira Gandhi raked up the issue again. Gandhi reportedly issued a statement in support of Referendum 2020. Talking to Tehelka, Dr Gandhi clarified that he is not supporting Punjab Referendum 2020. He said he is only supporting the right of the people to express their political, religious, economic views freely in a democratic country like India. If they do so there should not be any persecution or prosecution.

Dr Gandhi said when people often declare India will be a Hindu Rashtra in a few years time no one criticizes them.

“Why should Dalits, minorities including Sikhs be questioned if they raise their issues and demands peacefully? Why should they face sedition charges? What is wrong in the expression of their views? Why should government gag their voices? I also support democracy. It is the democratic right of every citizen to express themselves and I stand by that,’’ he said.

Gandhi also uploaded a video on his Facebook account saying everyone in the country has a right to express his or her views through democratic means. The government, in turn, should not gag such voices, the video showed him declaring. AAP so far has not taken any note of the statement of its suspended MP. 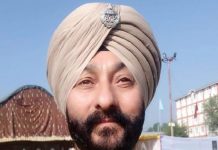