A Sukhoi Su-30MKI under-construction fighter jet crashed on June 27 morning in Wavi-Tushi village near Pimpalgaon Baswant town, around 25 kilometres from Nashik, during a test flight. No causalities have been reported so far and both the pilots in the aircraft ejected safely before the plane hit the ground, police said.

The aircraft crashed at 11.05 am and the Pimpalgaon police station received information about the crash at 11.15 am, a police official reportedly said.

Police said that the aircraft is developed by Russia’s Sukhoi and built under license by the Hindustan Aeronautics Limited (HAL), had taken off from the HAL airstrip near Nashik.

Both the pilots who ejected safely before the crash were on deputation from the Indian Air Force (IAF).

“The IAF personnel at Ojhar Air Force station, as well as police have reached the site after the incident,” police added.

Sources revealed that that the Sukhoi crash may have happened due to a technical glitch. A detailed probe has been ordered.

More details on the crash are still awaited. 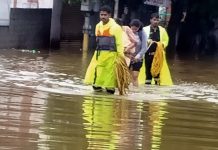