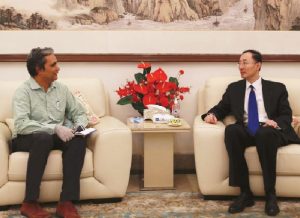 A notice was issued by the Broadcasting Corporation of India (Prasar Bharati) that owns All India Radio and Door Darshan to the Press Trust of India (PTI), the national news agency of repute widely known for its colourless factual reporting of news that enjoys high public credibility, threatening it that the public broadcasters will stop subscription of the news agency for its “anti-national” reporting of an interview by Chinese Ambassador to India in June 2020.

It was followed by another notice a fortnight thereafter on July 7, 2020, by the Ministry of Housing and Urban Development charging the PTI for misuse of lease agreement of the government land housing its headquarters on Delhi’s Parliament Street with a penalty of 84.48 crore and payment of the same within a month.

These developments highlight that the NDA Union Government is out to finish the news agency and prop up some other captive news agency. It also forms part of the subversion of the media under the current fascist Sangh regime.

Examples are coverage of the disastrous decisions of demonetisation, the Covid-19-induced disastrous and brutal lockdown ostensibly to fight the pandemic infection, and government’s response to Chinese incursion in Ladakh. Prime time debates on most of the TV channels are attempts to fan anti-Muslim prejudice among people in line with Sangh agenda and its social media campaign.

Fake news has become the order of the day so much so that a new term WhatsApp University has been coined wherefrom people derive information from its forwards that propagate falsehoods and outright fabrication for fanning inter-faith hatreds.

Submission of much of the mainstream media to the government has been brought about by a combination of inducements, threats and media capture through crony capitalists.

Many media houses have come to be owned by businessmen having various corporate interests that can easily be brought to heels to do the government’s bidding through official incentives or disincentives, such as plum contracts, threat of being victimized by the government’s investigating agencies like CBI, ED, Income Tax etc. Others are bought over by being given hundreds of crores of government’s advertisements as well as packets that go regularly to influential anchors and editors.

However, there are a few in the mainstream media who have refused to succumb to such inducements, threats or corporate capture by crony capitalists.

Fortunately, with the increasing use of smart phones, growth of the social media and internet media some independent journalists have flourished on these platforms, which are more difficult for the government to control.

Nevertheless, the government still exercises some degree of control over them by threatening individual journalists and editors with FIRs of sedition putting pressure on those few independent trusts that fund some of these internet media organisations, as also by influencing and bringing to heel major social media platforms like Facebook, Twitter, Instagram, YouTube etc.

So far, 55 journalists have been booked under sedition law or anti-terror law just for factual reporting, questioning the government or scrutinizing its performances, to maintain a modicum of journalistic ethics, which the government cannot digest. All such journalists booked are in the BJP ruled States.

Even otherwise, asking questions for accountability of the government is anti-national crime chargeable under sedition and anti-terror law.

The NDA Government use captive mainstream media to divert public attention from pressing issues facing them to escape accountability to the people. Mainstream media is party and guilty of partnering with the one man fascist regime where everything is arbitrary, authoritarian, partisan and anti-people!

Views expressed are the author’s own