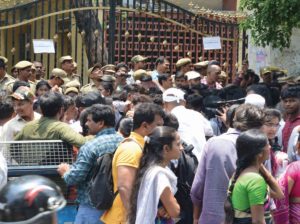 Suicide by more than 20 students and massive protests forced the Telangana government to announce free re-verification of answer sheets of over 3 lakh students, who were declared failed in the examination conducted by the state’s Board of Intermediate Education (BIE).

Telangana Board of Intermediate, which is at the centre of a row over goof-up in declaring results of Intermediate examination, suspended a teacher and imposed fine on another for giving a student ‘0’ marks instead of ‘99’ on April 28.

A day after three-member committee submitted its report to the government, Board of Intermediate Education (BIE) began action against those found guilty of dereliction of duty. BIE announced on April 28 that it has imposed a fine of 5,000 against Uma Devi, a teacher of a private school who evaluated Telugu paper of Navya, a 12th standard student but instead of giving ‘99’ marks gave her ‘0’ marks. Uma Devi has also been sacked by her school management.

BIE also suspended Vijay Kumar, a teacher of a tribal welfare school, who had served as scrutiniser but failed to notice the blunder. The goof-up by the Board has triggered a spate of suicide by students and protests by parents, student bodies and opposition parties. They are demanding action against the higher-ups in the Board and the Globarena Technologies, an IT company, which was allegedly found guilty of the massive bungling.

Earlier, Chief Minister K Chandrasekhar Rao had made an emotional appeal to the students to not take an extreme step and respect the precious life, two more students reportedly committed suicide due to failure in their exams, taking the toll to 21, according to a report.

While a boy jumped in front of the train and ended his life in Warangal, another student — a girl from Mahabubnagar burnt herself to death in the past 24 hours. According to the police and the parents, both the students were depressed after not performing well in the examination.

This has become the highest number of suicides recorded post-Intermediate results in the state over the last four years. In 2018, six student suicides were reported after the results were announced. While there were no such incidents from 2015 to 2016.

These suicides have triggered protests from parents and students, who blame that faulty evaluation system led to the failure of 3.28 lakh students out of 9.74 lakh students who appeared in the intermediate examination in March this year.

In a related development, Telangana BJP Chief K Laxman sat on an indefinite fast, demanding a judicial probe into the alleged goof up in the declaration of results of intermediate examinations. “BJP feels the entire process has to be corrected. So far, 23 students have committed suicide. BJP wants to take it to the logical conclusion and hence state BJP president K Laxman will observe an indefinite fast from Monday at the party office here, demanding a probe by a sitting High Court judge to fix responsibility,” BJP national general secretary P Muralidhar Rao said on April 28.

On the three-member committee of technical experts, appointed by the Telangana government following the furore overIntermediate examination results, the senior BJP leader alleged that there was an effort to shield the guilty. Claiming that over 20 students have committed suicide reportedly after failing in exams or scoring poor marks, a Congress-led opposition delegation, has also demanded that Governor ESL Narasimhan order a judicial probe into the matter.

The panel was appointed after the alleged bungling in the announcement of the results, which led to widespread criticism from students, parents, students’ organisations and political parties. The exams were conducted during February and March this year and the results were declared on April 18.

Blaming TRS working president KT Rama Rao for the goof-up in the declaration of results, the opposition parties– Congress, Telangana TDP, TJS and CPI had Saturday announced they would stage a demonstration in front of the TSBIE office on April 29 to protest the “mismanagement” by the Board.

Rama Rao reacting to questions on twitter said, “I was as agonised as anyone else in our state. What happened was truly unfortunate. Now that GOVT appointed committee has submitted its report, action should be taken on those that are responsible.” In a series of tweets, Rao also said what happened was “tragic” and those responsible should be punished.

“I am a parent too and I can understand the pain of those that have lost their children.” Speaking to reporters here, All India Congress Committee (AICC) in-charge of Telangana R C Khuntia said his party supports the ‘Chalo Intermediate Board’ protest. “The government appointed committee is accepting there is mistake. But no action is taken by the Telangana government. Who is responsible?” he asked.

Seeking resignation of the Education Minister, he said the protests would continue until action was initiated against the guilty. In a related development, Opposition party leaders Sunday met family members of some students in the city, who had allegedly committed suicides.

The three-member committee, constituted by the Telangana government to look into the discrepancies in the Intermediate examination results, had submitted its report on April 27. “The three-member committee to look into the developments that took place after the announcement of Intermediate results gave its report. It is under the consideration of the government,” Education Secretary B Janardhan Reddy had said. “Very soon, we will definitely share their recommendations and the Action Taken Report,” he added.

The 10-page report emphasised on the measures to be taken in future (to ensure smooth conduct of exams). The alleged bungling in examination results led to protests by students, parents, students’ organisations and political parties. Some students claimed that they either failed or got poor marks though they had done well in exams and obtained high marks in Intermediate first year. Opposition Congress, TDP, BJP and other parties complained to Governor ESL Narasimhan and sought a judicial probe into the alleged goof-up. The Congress-led delegation claimed that as many as 20 students committed suicide in the aftermath of the announcement of results.

The exams were conducted during February and March this year and the results were announced on April 18. There have been allegations of bungling in the announcement of the results. The government has announced that failed students need not apply for re-counting and re-verification. Thousands of students, who passed the examination, have also applied for re-verification.

The National Human Rights Commission (NHRC) has issued a notice to the Telangana government over the reported goof-up in the intermediate exam results which allegedly led 18 students to commit suicide since March this year. The commission said it has taken cognisance on its own over media reports that 18 students, who had failed in the examinations conducted by the Board of Intermediate Education, have allegedly committed suicide amid massive protests in the state.

“The commission has issued a notice to the chief secretary, government of Telangana, calling for a detailed report in the matter within four weeks, including action taken against the guilty and relief, if any, provided to the aggrieved families,” the commission said in a press release. It said that about three lakh students have reportedly failed in the exams and they, along with parents, are staging protests there.

“It has observed that the contents of the news reports, if true, raise the issues of serious lapse on the part of the authorities amounting to violation of human rights,” the release said. “The National Human Rights Commission has taken suo motu cognisance of a media report that 18 students have committed suicide since March 2019 who have reportedly failed in the intermediate examinations conducted by the Board of Intermediate Education (BIE), as large-scale discrepancies have triggered furore in the state,” the commission said.

Referring to media reports, the commission said several students failed to even get pass marks in the examination and aggrieved students have also approached the high court there.

“As mentioned in the news report, around 10 lakh students took the Class 12 exam in February 2018, and nearly 3.5 lakh have failed, making it a gigantic task for the board to conduct supplementary exams for such a large number of students,” it said, adding that time was also running out for students who have to appear in competitive entrance exams like NEET and JEE.