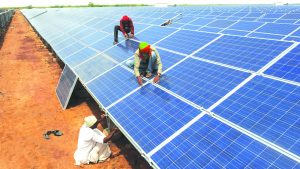 As on 31.10.2019, a total grid connected solar power generation capacity of 31,696 MW has been set up in the country, projects of 17998 MW capacities are at various stages of installations and tenders for 36278 MW capacity projects have been issued. With new tenders of around 15000 MW planned in remaining period of 2019-20 and 2020-21, India is on course for achieving the target.

Under the Solar Mission, an ambitious Solar Park Scheme has been prepared for setting up of over 50 Solar Parks and Ultra Mega. The government is targeting Solar Power Projects targeting over 40,000 MW of solar power projects. Then there is scheme for setting up of Grid-Connected Solar PV Power Projects by the Central Public Sector Undertakings (CPSUs) and the Government of India organizations with Viability Gap Funding (VGF).

Most of the Solar power projects in the country have been/are being set up with private investment. The Union Government has been implementing National Solar Mission under which various Schemes have been launched for promoting the generation and use of solar power in the country. The Ministry has also launched a Mobile App for solar rooftop systems. Union Minister of State (IC) New & Renewable Energy, Power and Skill Development and Entrepreneurship R.K. Singh provided this information, in written reply to a question in Lok Sabha on November 28, 2019. Significantly, solar power in India has become a fast developing industry. India has the lowest capital cost per MW globally to install the solar power plants. The Indian government had an initial target of 20 GW capacity for 2022, which was achieved four years ahead of schedule.

In 2015 India raised and upwardly revised the target to 100 GW of solar capacity (including 40 GW from rooftop solar) by 2022, targeting an investment of US$100 billion. India has established nearly 42 solar parks to make land available to the promoters of solar plants.

Rooftop solar power accounts for 2.1 GW, of which 70 per cent is industrial or commercial. In addition to its large-scale grid-connected solar photovoltaic (PV) initiative, India is developing off-grid solar power for local energy needs. Solar products have increasingly helped to meet rural needs; by the end of 2015 just under one million solar lanterns were sold in the country, reducing the need for kerosene. That year, 118,700 solar home lighting systems were installed and 46,655 solar street lighting installations were provided under a national programme. just over 1.4 million solar cookers were distributed in India. The International Solar Alliance (ISA), proposed by India as a founder member, is headquartered in India.

Sources said that the Ministry of New and Renewable Energy will implement a scheme for setting up 300-MW grid-connected and off-grid solar photovoltaic power projects by defence establishments as well as paramilitary forces with Viability Gap Funding support of 750 crore under the second and third phases of Jawaharlal Nehru National Solar Mission during the period 2014-15 to 2018-19.

The objectives of the scheme are to achieve energy security by utilising the available land and rooftops of the defence sector and paramilitary forces for installation of solar power plants, and at the same time, encourage the use of domestically manufactured equipment to boost indigenous production of solar cells and modules.

The scheme covers establishments of the Army, Navy, Air Force, Ordinance Factory Board, defence laboratories and defence public sector undertakings as well as paramilitary forces that fall under the Ministry of Home Affairs. These establishments may identify locations anywhere in the country including in border areas for developing solar power projects under the scheme during the five-year period starting from 2014-15.

Even if some of the locations identified fall along international borders but do not belong to either the Ministry of Defence or the paramilitary forces, such land can still be used for developing solar power projects under the scheme provided the defence forces, defence-related organisations or paramilitary forces are able to partly or fully use the power generated by the solar power plants.  The minimum project capacity allowed under the scheme is 1 MW and the maximum up to 20 MW.

The tendering process for developing the solar power projects will be done by the defence establishments themselves, if necessary, in phases, based on availability of land and rooftops. The MoD is free to follow its own procurement systems, or alternatively, develop detailed guidelines and procedures for carrying out the tendering process.

The defence establishments and paramilitary forces can either adopt the developer mode or the EPC mode for setting up the grid-connected solar PV power projects of 300 MW aggregate capacity.

In case of developer mode, the MNRE will provide VGF with a view to make solar power available at a predetermined fixed tariff of 5.50 per unit for the project period of 25 years. In case of accelerated depreciation benefit, the tariff has been reduced to 4.75 per unit. The power purchase agreement will be signed between the selected developer and the defence establishment where land is located.

The surplus power generated can be sold to distribution companies by the developer or the defence establishment may buy the entire power and sell the surplus to distribution companies at its end. The VGF will be provided to developers based on their bid. The developers will be selected on the basis of bids for minimum VGF requirement with commitment to supply solar power at the pre-determined tariff.

The category in which a particular project falls will be determined based on its alternating current capacity and on the basis of contiguity of the geographical location. The developer needs to put his own equity of minimum 1.5 crore per MW. The VGF will be released in six tranches.

In the EPC mode, the defence establishment will own the project and get it developed through an EPC contractor. The VGF is admissible if the contract gets awarded through open tender based on total price or cost of setting up and commissioning of the project. The VGF will be released in four installments based on actual progress of work. The last installment of 25 per cent of VGF will be released only after successful commissioning of the project.

The solar power projects developed under the MNRE scheme have to use solar cells and modules made in India. Off-grid solar applications are also covered under the scheme.

Meanwhile, the government has given its nod to a proposal for setting up 12,000 MW grid-connected solar photovoltaic (PV) power projects with an estimated viability gap funding of 8,580 crore.

The decision was taken by the Cabinet Committee on Economic Affairs (CCEA) chaired by Prime Minister Narendra Modi, according to Law Minister Ravi Shankar Prasad.  The proposal seeks to implement “the Central Public Sector Undertaking (CPSU) Scheme Phase-ll for setting up 12,000 MW grid-connected Solar PV Power Projects, by the Government Producers with Viability Gap Funding (VGF) support of 8,580 crore for self-use or use by Government or Government entities, both Central and State Governments”, an official statement said.

With the implementation of the scheme, 12,000 MW or more of grid-connected solar PV power projects would be set up by government producers in four years (2019-20 to 2022-23), thereby creating investment of about 48,000 crore, it said.

The Scheme will mandate use of both solar photovoltaic (SPV) cells and modules manufactured domestically as per specifications and testing requirements fixed by MNRE (Ministry of New & Renewable Energy).

In addition, more than 1.2 lakh employment opportunities will be created for the local population by way of involvement in setting up of solar power projects and also in manufacturing of domestically produced cells and modules.

The approved scheme is for carrying out 24,41,500 meter of drilling and 3,575 line km (LKM) of surface geophysical survey for Promotional (Regional) Exploration & Detailed drilling in Non CIL Block in Coal and Lignite along with CBM/Shale gas studies and associated studies to estimate and prove coal resources during 3 years period.