Sri Lankan President Gotabaya  Rajapaksa has declared a nationwide public emergency amidst a spate of protests, including outside his house, over the worst economic crisis in the island nation. Rajapaksa issued a special gazette notification late on Friday night, declaring a public emergency in Sri Lanka with immediate effect from April 1. In the gazette, the President states: “Whereas I am of opinion that by reason of a public emergency in Sri Lanka it is expedient to do so in the interests of public security the protection of public order and the maintenance of supplies and services essential to the life of the community.

Many protesters clashed with police and military outside President Rajapaksa’s residence in a suburb of the capital, Colombo. The island nation of 22 million people is in the midst of its worst economic crisis in years with rolling blackouts for up to 13 hours a day as the government scrambles to secure foreign exchange to pay for fuel imports.

According to economic policy experts, a bailout from the International Monetary Fund (IMF) is the only viable option for Sri Lanka to tackle its debt of nearly $4 billion. The IMF will initiate discussions with Sri Lankan authorities on a possible loan program in “coming days”, an IMF spokesman said on Thursday.

Opposition condemns Emergency declared by President Rajapaksa. “We call upon #President@GotabayaR to immediately rescind this gazette notification. You cannot stifle protests and opposition to the regime by declaring a state of #emergency. I call upon fellow members of #Parliament not to approve this ill-advised move,” M. A. Sumanthiran, MP, said in a tweet.

The southern towns of Galle, Matara and Moratuwa also saw anti-government protests, and similar demonstrations were reported in the northern and central regions. All held up traffic on main roads.

In the highland town of Nuwara Eliya, activists blocked the opening of a flower exhibition by Prime Minister Mahinda Rajapaksa’s wife, Shiranthi, police said. The capital was placed under indefinite curfew in the wake of the violence.

Security forces fired into the crowd and used tear gas and water cannon to disperse the demonstrators, who were demanding Rajapaksa’s resignation.

People who are in protest trying to storm the home of Sri Lankan President Gotabaya Rajapaksa turned violent Thursday, with at least one man critically wounded, as residents slammed the government’s handling of the country’s crippling economic crisis. 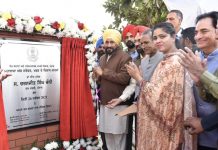