IMD has issued a warning for the hill states of J&K, Himachal Pradesh and Uttarakhand. These States are likely to witness squall and thunderstorm in next two days while parts of Haryana, Chandigarh, Punjab,UP, Delhi and Rajasthan may be struck by thunderstorms or dust storms  owing to fresh western disturbance over the region.

“Under the influence of a fresh western disturbance from May 13, fairly widespread to widespread precipitation is highly likely to occur over the western Himalayan region (J&K, Himachal and Uttarakhand) along with thunderstorm accompanied with squall (wind speed reaching 50-70 kmph) and hail at isolated places during the second half of week between May 10 and 16. “Isolated to scattered rainfall with isolated thunderstorm/dust storm is also likely in Punjab, Haryana, Chandigarh, Delhi, UP and Rajasthan during the same period,” the IMD said.

Over the past fortnight several states have been witnessing erratic weather with winds blowing at speed of around 50 kmph. 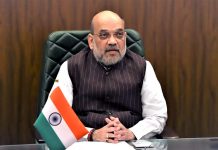