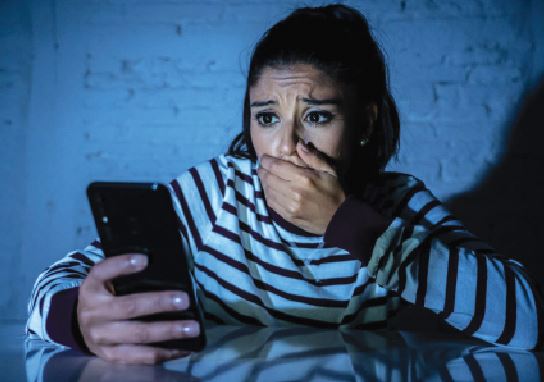 Have you undergone the unpleasant experience of being stalked? In the midst of a meeting, my phone buzzed. I picked the call to see that it was a Facebook messenger call from my school buddy. Thinking to be urgent, I answered the call, little realising then that the call was from a stalker who had hacked my friend’s photograph. Hiding his identity by stealing my friend’s photograph, the caller appeared to me as a friend, but actually was displaying obscene and vulgar images. Shivering for a moment, I did not understand as to why I was targeted and who it was. It was online stalking. My reflexes worked, I blocked the user, the only remedy available to diffuse the situation.

Such incidents happen every day. Many of us do not even dare to share. Why do we choose to keep mum and ignore the stalkers instead of approaching the police? Probably because we are intimidated by the thought of approaching the police or we feel that the police will not help. Or, maybe we are unaware of the existence of any such law that prohibits or protect us from online harassment. If a law exists only on paper and not in the knowledge of the citizens, the law is merely a law and remains practically non-existence. That happens in most cases of online stalking. Over 75 per cent of the victims are women and the actual figures can really never be ascertained since most crimes of such nature go unreported.

Text messaging, instant messaging and e-mail provide stalkers with additional avenues of contact, often with the benefit of anonymity, while data brokers sell personal information for a nominal fee. Social media has become a part of everyday life. It is very unlikely to find someone without at least one social media account. Whether it is mindlessly scrolling through ones feed or posting pictures, or checking if one has any more ‘likes’ or ‘comments’ on a previous post, most people spend a large portion of time glooming in smartphones. With technology democratizing social media, India now has around one billion mobile subscribers and an estimated 500 million Internet user. There has been a change of the profile of an average stalker. The modus operandi of offline stalking has shifted to online stalking and there also has been a rise in cases of cybercrime in the country, particularly those involving women and young adolescents.

To many, the internet mirrors the real world — though it is not. A cyberstalker does not have to leave his home to find, or harass his targets, and has no fear of physical violence since he believes he cannot be physically touched in cyberspace. He may be a neighbour or a boyfriend or even a relative! And, a stalker could be of either sex too. Feeling powerful, as in having control over another, the whole act makes pleasurable for these criminals. The internet makes it easy ……as it grants anonymity.

It doesn’t matter if one is a college student or a working professional, or a housewife — many women get stalked on a regular basis through social media platforms. Social media has become an all-pervasive part of our personal and professional lives. From selfie-style to college get-togethers, birthday bashes, marriage anniversaries, everyday activities, nothing seems to be complete without the photos being splashed on Face book. What’s the charm of enjoying a gourmet burger without Instagramming a lip-smacking shot of it? From the addictive nature to the privacy issues, the stalker trolls actively to seek out women to harass, a new weapon to victimize them online. Cyber stalkers have been known to fit GPS devices to their victims’ cars, use geolocation spyware on their phones, and obsessively track their victims’ whereabouts through social media. Such harassment can disrupt the life of the victim and leave them feeling very afraid and threatened. Face book stalking is one of the most common and intensive internet stalking.

Under the legal parameter ‘stalking’ is a course of conduct directed at a specific person that would cause a reasonable person to feel fear. In California, stalking was recognized as crime back in 1990. But it took us almost 68 years of Independence to recognize it officially as a crime in 2013 after the incident of Union Minister Smriti Irani being stalked while shopping in a popular Fab India outlet in Goa that received a wide coverage. The Criminal Law Amendment Act, 2013 not only recognized it as a crime but also defined it in the widest way possible under section 354D of the Indian Penal Code. The Hrithik Roshan-Kangana Ranaut
episode turned cyber stalking into a widely discussed national topic in 2016.

On October 10, 2020, the Times of India reported that in Maharashtra, one woman is stalked or bullied on social media every day. As per the latest 2019 data released by the National Crime Records Bureau, Maharashtra reported the highest number of cases of cyber stalking/bullying of women for three years in a row — 1,126. Maharashtra also accounted for one-third of the total 2,051 cyber stalking/bullying cases reported across India from 2017 to 2019. Andhra Pradesh came a distant second with 184 cases and Haryana third with 97 cases.

Cyber stalkers can be categorized into different types.

The rejected stalker: These stalkers are the dangerous kinds. They feel cheated, rejected and perceive them as victims.

The resentful stalker: There are some who are self-righteous, self-pitying people. They threaten, but generally do not act on it.

The intimacy-seeking stalker: These are mentally ill and delusional men who believe that the woman they are stalking reciprocate the attraction that he feels.

The incompetent stalker: Socially awkward, these stalkers do not even realise that what they are doing is wrong and illegal

The predatory stalker: These are the worst kind of stalkers. The only agenda on the minds is sexual gratification, control, and violence. The predatory stalker plans and rehearses before he strikes. The Hindi films ‘Darr’ and ‘Anjaam’, are such examples.

The vengeful cyber stalker: Typical examples are disgruntled employees. Ex-spouses can turn into this type of stalker. Films like ‘Daraar’ and ‘Tere Naam’ are other examples.

When stalked, one must act immediately. Build basic security into one’s online life. Make sure that the phone and computers are password protected. Use a strong password, not something easy to guess, and reset the passwords regularly. Use anti-spyware software to detect any malicious software that’s installed. One can directly register the offence online in the website cyber crime.gov.in. Or, can make a complaint to the National Commission for Women (NCW). Zero FIR- this kind of FIR can be filed at any part of India irrespective of its Jurisdiction.

The author is an Associate Professor& Dean of National University of Study & Research on Law. Views are her own