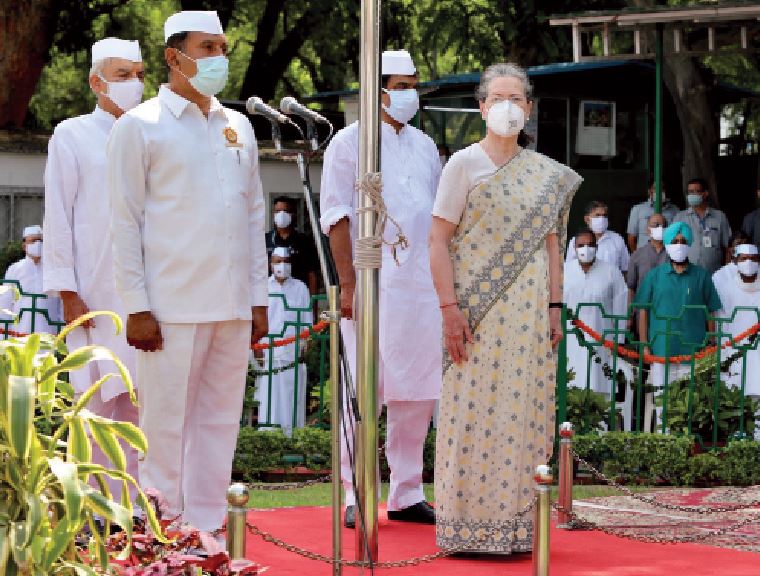 The Congress supremo urges the opposition parties to rise above their compulsions and work together to take on the BJP, reports AMIT AGNIHOTRI

Congress chief Sonia Gandhi sounded the poll bugle for the 2024 national elections as she urged the opposition parties to rise above their compulsions and work together to take on the BJP.

After former party chief Rahul Gandhi was seen at the forefront of Congress-led opposition unity during the recently concluded Monsoon Session of Parliament, Sonia convened an online strategy session of 19 parties on August 20 to take the agenda forward.

The plan is to extend the opposition unity achieved during the monsoon session beyond the Parliament and implement it on the ground.

“I am confident that this unity will be sustained in future sessions of Parliament as well. But the larger political battle has to be fought outside it,” she said.

Stressing on the need to come together, Sonia said there was no alternative for the opposition to work cohesively if it wanted to protect the values of the freedom struggle and the sanctity of the Constitution.

“This is a challenge, but together we can and must rise to it because there is simply no alternative to working cohesively together. We all have our compulsions, but clearly, a time has come when the interests of our nation demand that we rise above them,” she said.

“Of course, the ultimate goal is the 2024 Lok Sabha elections for which we have to begin to plan systematically with the single-minded objective of giving to our country a government that believes in the values of the freedom movement and in the principles and provisions of our Constitution,” the Congress chief said.

She highlighted that the 75th anniversary of the country’s Independence was “indeed the most appropriate occasion for us to reaffirm our individual and collective resolve” and assured the leaders that “the Congress would not be found wanting” in playing its part.

Rahul Gandhi, who had been leading opposition meetings during the Parliament session regularly, was of the view that the parties should project an “alternate” vision to the BJP, espousing their idea of India. 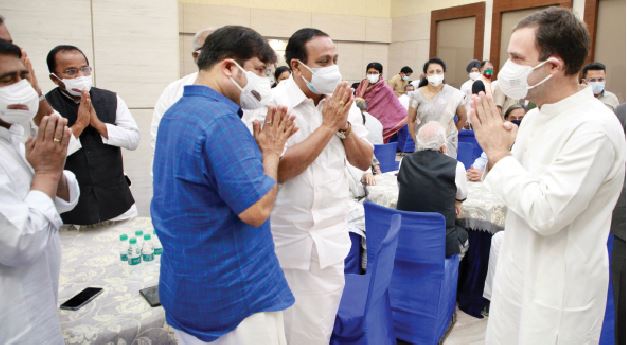 Sonia’s meet is being seen as a response to a similar initiative taken earlier this month by senior Congress leader  Kapil Sibal, who had invited several key opposition leaders over dinner on August 9 to discuss the way forward for opposition unity.

The Gandhis were not invited to the dinner hosted by Sibal, one of the G-23 or the group of senior leaders who had written a dissent letter to Sonia Gandhi in August 2020 urging her to undertake radical reforms in the party and hold polls for all party posts including that of the president.

Before the Parliament’s monsoon session, it was being alleged that the Congress was delaying its leadership issue and was shying away from playing the role of an opposition anchor.

In the aftermath of the West Bengal assembly polls, in which Mamata Banerjee defeated the mighty BJP, the Trinamool Congress chief had announced her plans to go national and had been hailed by the parties as a new icon for opposition unity.

For a change, Rahul Gandhi emerged from the shadows to lead the opposition protests and meetings during the monsoon session of Parliament which saw several parties jointly take on the Centre.

Sonia’s effort to push opposition unity is being compared to the Congress chief’s efforts in 2004 which led to the formation of the United Progressive Alliance which was able to defeat the NDA government led by then prime minister Atal Behari Vajpayee.

This time, she has set the target of 2024 Lok Sabha polls three years in advance. Effectively this means that though a beginning has been made, the opposition parties must realize that the road ahead for their unity plan is a long one.

Keeping that in kind, the leaders agreed to carry forward such strategy meetings, identify issues to be taken up jointly and prepare a blueprint for fighting the 2022 assembly polls in eight states together.

To start with, joint protests will be staged by the opposition parties across the country from September 20-30.

The Congress was represented by former Prime Minister Manmohan Singh, Leader of the Opposition in the Rajya Sabha Mallikarjun Kharge, veteran A K Antony and Rahul Gandhi.

The Uttar Pradesh based parties, Samajwadi Party and Bahujan Samaj Party did not attend the meet while Delhi based Aam Aadmi Party and Punjab based Shiromani Akali Dal were not invited. SP chief Akhilesh Yadav however had expressed his inability to join the meeting.

One good thing that emerged from the opposition meeting was that the parties understood that they need to put the contentious issue of who will lead the alliance aside and instead focus on forging a  common agenda to take on the Centre.

In the past, personality issues had been cited as a block towards opposition unity.

“Forget who is the leader, let’s keep our personal interests aside. The people are the leaders. Let us set up a core group and work together,” Mamata Banerjee said, adding that every opposition party, including even those not allied with the Congress, should be invited as the “fight is against the BJP.”

NCP chief Sharad Pawar, whose name had earlier been floated as the UPA chairperson given Sonia’s ill-health, praised the Congress chief for convening the opposition meeting and noted the situation in the country was very disappointing.

“The farmers have been agitating for many months. It is a painful picture in a democratic country like India. Economic slowdown, Covid pandemic, unemployment, border tension, issues of minorities… The country is faced with many issues. And the present government has failed to resolve all these issues… those who believe in democracy and secularism… those people who want to work unitedly to protect our country’s democratic values… all of them should come together,” Pawar tweeted.

The NCP chief, who played a key role in the formation of the ruling Shiv Sena-NCP-Congress alliance in Maharashtra, further said: “Those who believe in democracy and secularism and those who want to save the democratic principles of our country, they should come together. That’s my call.” Pawar had hosted a meeting of select opposition leaders at his Mumbai residence in June after the West Bengal poll results. The conclave was organised under the aegis of Rashtra Manch floated by former BJP leader Yashwant Sinha, who is now with the TMC.

At Sonia’s meeting, Pawar urged the opposition parties to prioritise issues rather than take up all of them at once.

Shiv Sena’s Sanjay Raut, who attended the meeting along with party chief Uddhav Thackeray, said: “The CM said that in view of the 2024 general elections, the opposition unity should be taken to the people in such a way that they believe in it.”

Tamil Nadu chief minister MK Stalin said: “The recent Parliament session witnessed our unity. It must grow stronger. Federalism is being destroyed due to the scant respect BJP has for states’ rights. It is imperative the opposition stands united at this hour.”

Communist Party of India national secretary D Raja urged the opposition parties to fight the 2022 state elections first and then focus on the 2024 national polls.

As was the case during the Parliament session, the opposition parties issued a joint statement after the strategy session to list their agenda which includes the Pegasus snooping scandal, repeal of three farm laws, mismanagement of the pandemic, high prices of food, joblessness and passage of bills without debate.

The opposition parties also listed 11 issues on which they want to see action from the government including increase in vaccine production, procurement of more vaccines from abroad, tax-free cash support of 7,500 per month to all those outside the Income Tax bracket, withdrawal of central excise duties on petrol and diesel, reduction in price of cooking gas, stopping uncontrolled privatization of public sector, ordering Supreme Court monitored probe in the alleged snooping issue, probing the Rafale jets deal, releasing all political prisoners in Union

Territory Jammu and Kashmir and those in custody under the anti-terror UAPA in the Bhima Koregaon case and the anti- Citizenship Amendment Act protests. The issues being raised by the opposition are likely to be the focus of the joint campaigns and protests in the pipeline.

The opposition parties also criticised the PM’s Independence Day speech saying it did not focus on a single-issue concerning people’s miseries. “The speech was full of rhetoric, empty slogans and disinformation. In fact, it was a repackaging of earlier speeches given in 2019 and 2020. This speech is an ominous warning that the lives of our people will continue to be ruined further,” the statement said. 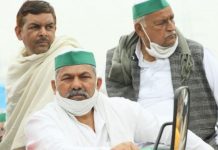