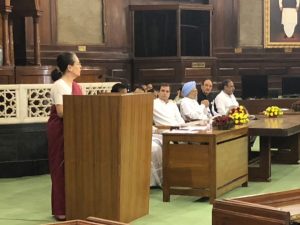 Sonia Gandhi was on Saturday elected as the chairperson of Congress Parliamentary Party (CPP) at the meeting of party MPs.

According to the sources, former Prime Minister Manmohan Singh proposed her name.

Congress spokesperson Randeep Singh Surjewala in a tweet said, “Smt. Sonia Gandhi elected as the leader of Congress Parliamentary Party! She says, ‘we thank the 12.13 Cr voters for reposing faith in the Congress Party’.”

“Every Congress member must remember that each one of you is fighting for the Constitution, for every person in India irrespective of the color of his skin or belief,” Rahul Gandhi was quoted as saying in a tweet by Surjewala.

The meeting came a week after party president Rahul Gandhi had expressed his desire to quit from his post.

Numerous senior leaders of the party had visited Rahul’s residence in Delhi and urged him not to step down. However, Rahul has been adamant on his decision.