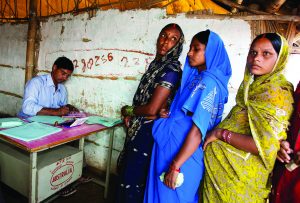 Many states in India have achieved the distinction of achieving the Maternal Mortality Rate (MMR) target before the year 2020. The states include Andhra Pradesh, West Bengal, Jharkhand, Haryana and Gujarat. The Minister of State (Health and Family Welfare), Ashwini Kumar Choubey confirmed in a brief statement in the Lok Sabha on December 13, 2019 that there were a number of states in India that had achieved the distinction of achieving the target of Maternal Mortality Rate (MMR).

Further enquiries reveal that Maternal Mortality Ratio (MMR) of India has declined by 8 points in one year as per the latest Special Bulletin on MMR released by the Registrar General of India. This decline is important as it translates to nearly 2000 additional pregnant women saved annually.

Indeed, India seems on track to achieving even the Sustainable Development Goal (SDG) target for reducing MMR by 2025, five years ahead of timeline of 2030. The states doing particularly well in this regard are Kerala, Maharashtra, Tamil Nadu, Andhra Pradesh, Jharkhand, Telangana, Gujarat, Uttarakhand, West Bengal, Karnataka and Haryana. This was the result of institutional deliveries, quality and improved coverage of health services.

Haemorrhage remains the leading cause of maternal mortality, accounting for over one quarter (27 per cent) of deaths. Similar proportion of maternal deaths were caused indirectly by pre-existing medical conditions aggravated by the pregnancy. Hypertensive disorders of pregnancy, especially eclampsia, as well as sepsis, embolism and complications of unsafe abortion also claim a substantial number of lives.

The complications leading to maternal death can occur without warning at any time during pregnancy and childbirth. Most maternal deaths can be prevented if births are attended by skilled health personnel — doctors, nurses or midwives — who are regularly supervised, have the proper equipment and supplies, and can refer women in a timely manner to emergency obstetric care when complications are diagnosed.

Complications require prompt access to quality obstetric services equipped with life-saving drugs, including antibiotics, and the ability to provide blood transfusions needed to perform Caesarean sections or other surgical interventions.

According to Dr. PoonamKhetrapal Singh, the first woman to assume the office of WHO Regional Director for South-East Asia the United Nation’s Sustainable Development Goals require India to bring down its MMR to 70 by 2030.

According to her, WHO commends India for its groundbreaking progress in recent years in reducing the maternal mortality ratio (MMR) by 77 per cent, from 556 per 100 000 live births in 1990 to 130 per 100 000 live births in 2016. India’s present MMR is below the Millennium Development Goal (MDG) target and puts the country on track to achieve the Sustainable Development Goal (SDG) target of an MMR below 70 by 2030.

What are the key factors responsible for India’s remarkable achievement? Since 2005, coverage of essential maternal health services has doubled, while the proportion of institutional deliveries in public facilities has almost tripled. The welfare schemes like the Janani Shishu Suraksha Karyakram — which allows all pregnant women delivering in public health institutions to free transport and no-expense delivery, including caesarian section — has largely closed the urban-rural divide traditionally seen in institutional births.

Overall, 75 per cent of rural births are now supervised, as compared to 89 per cent of urban deliveries. Also the women in India are more literate than ever, with 68 per cent now able to read and write. They are also entering marriage at an older age, with just 27 per cent now wedded before the age of 18. Campaigns such as the Pradhan Mantri Surakshit Matritva Abhiyan have been introduced with great impact, allowing women access to antenatal check-ups. This has checked the maternal mortality or deaths due to complications from pregnancy or childbirth.

The details of States/UTs who have achieved National Health Policy target of MMR 100 per lakh live births well ahead of 2020 is as under:

India has seen a decline of six per cent in the number of maternal mortalities, according to latest figures compiled by the Registrar General of India.

The decline has been most significant in Empowered Action Group States —
Bihar, Jharkhand, Madhya Pradesh, Chhattisgarh, Odisha, Rajasthan, Uttar Pradesh and Uttarakhand and Assam. Among the Southern States include Andhra Pradesh, Telangana, Karnataka, Kerala and Tamil Nadu the decline has been from 77 to 72 and in the other States from 93 to 90.