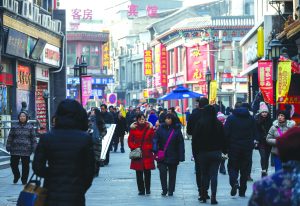 An opportunity awaits India as Chinese economy goes downhill. Can India capture that moment and emerge world leader with growth rates higher than China? The World Bank has predicted a global bleak economic outlook unless other engines carry on the growth process and the latest growth figures show that the Chinese economy may be heading downhill more rapidly than planned.

In the year gone by that is in 2018, China recorded the lowest growth rate since the economic boom. Post-Tiananmen Square protests, the Chinese growth rate is lowest. China and India had withstood the 2008 global financial crises. However, now China in serious crisis it seems. Though China is planning another stimulus, including tax cuts and more public spending, but it appears that these measures would not be enough to stop the slide.

We may call it Modism Economy, or result of consistent economic polices inherited from the UPA, India is uniquely placed in this respect with its growth rate having outstripped that of China for two successive years. In absolute terms, China is adding vastly bigger numbers than India, which is a quarter of its size, but the portends are not positive for China.

India is poised to grow because the Indian economy is considerably less vulnerable to a downturn. Another reason for downtrend in China is its trade war with the US. In the emerging scenario, India can be an attractive destination for multi national companies deciding to relocate in India. China’s stock market has been overtaken as the world’s second-biggest by Japan’s, having been swiped this year by the threat of a trade war with the United States and slowing economic growth. The figures show that Chinese stocks were worth $6.09 trillion, compared with $6.17 trillion in Japan. The US market is worth $31 trillion.

While global markets have been broadly hit by fears of a trade war between the world’s top two economies, Chinese equities are among the worst performers this year, with the benchmark Shanghai Composite Index slumping more than 16 percent since the start of January. The White House has made it clear that it was considering more than doubling threatened tariffs on a range of Chinese imports worth $200 billion. Washington has already imposed tariffs on $34 billion worth of goods and is considering hitting another $16 billion in the coming weeks.

The data indicates economic growth is slowing, while Beijing has embarked on a drive to cut a worryingly large debt mountain as well as reduce pollution. Also worrying investors are the Yuan’s recent losses, with the currency at its lowest level against the dollar for more than a year, while traders have been mostly unmoved by government measures and promises to support the economy. At the same time, Japanese corporate results have been broadly upbeat, providing some support to markets there, though the Nikkei is still slightly down this year.

Chinese stocks have been on a rollercoaster since taking the second spot in 2014. Fuelled by risky investing by individual investors looking for a quick profit, the market surged through early 2015 to hit a high of $10 trillion, but then the bubble burst and it went into a downward spiral, with the Shanghai composite crashing about 40 percent. China’s economy grew 6.6 per cent in 2018, its slowest pace in almost 30 years, confirming a slowdown in the world’s second largest economy that could threaten global growth.

After years of breakneck expansion, official data has now confirmed that China’s growth in 2018 was the country’s slowest reported rate since 1990 and down from 6.8 per cent in 2017. The data, puts pressure on Beijing to reach a deal with Washington to end the bruising trade war. The latest economic figures suggest China may no longer be able to help shore up weakling global growth. A government campaign to rein in risky debt has been compounded by a trade war with the US, hitting consumer and business confidence. Over the past few months consumer spending, manufacturing output, and investment have reached record lows.

So far China has held back from deploying the stimulus measures. Analysts say stimulus measures would not only undo government efforts to lower risk in the financial system, but are no longer effective in spurring growth. The first half of 2019 is likely to be equally difficult, with growth likely to recede further. Economists fear that debt could rise further this year if the government continues to inject stimulus into the economy to meet its growth targets regardless of a changing global economy.

Most economists doubt China’s official GDP figures, with some estimating that the real figure could be less than half the rate reported by the government.  The Chinese vice premier, Liu He, will visit the United States on 30 and 31 January for the next round of trade talks with Washington. The vice president, Wang Qishan, is attending the World Economic Forum in Davos later this month.

The meeting would be crucial since, China’s traditional economic drivers, infrastructure, real estate and exports, grew marginally last year, yet other areas such as advanced technology and services expanded.

The US president, Donald Trump, has that there had been progress toward a trade deal with China, but denied reports that he was considering lifting tariffs. Little doubt that the forecasters see the outlook for global growth as particularly uncertain. Trump has pledged to impose high tariffs on imports from China and to brand the country a currency manipulator. He has long maintained that China has been devaluing its currency to make its exports more competitive on overseas markets.

It is in this context that a great opportunity exists for India to outclass China in economic growth. India is facing an uncertain election with most political parties joining hands against the present regime. The resurgent Congress is also likely to make major inroads and promises to give the economy a major push. The big question is “to be or not to be that is the question”. India has the potential and growth rate picking up despite some economic misadventures shows inherent strength of India and a promise that it can surpass Chinese economy in near future.