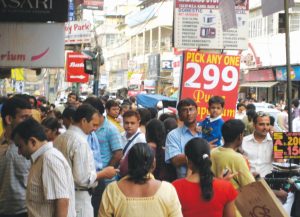 All PSU banks, infra, auto, energy, FMCG, metal, and pharma indices have gained at bourses in recent times but data points to an economic slowdown across sectors. The Society of Indian Automobile Manufacturers has reported Domestic sales of cars, commercial vehicles and two-wheelers in April down vis-à-vis corresponding period last year. The decline of almost 16 percent in total automobile industry sales is an indication that consumer demand across markets urban and rural, institutional and individual across length and breadth of the country is melting down.

Car sales were down 20 per cent and there is no stimulus to jack up the sales. In 2018-2019, the annual industry sales growth was a positive 2.70 per cent, but 10 out of the 17 companies that compete for space on India’s roads posted negative sales growth. In April 2019, the automobile industry recorded its worst ever-monthly sales fall in nearly eight years.

According to data put out by the Society of Indian Automobile Manufacturers, passenger vehicle sales slumped to 2.47 lakh in April 2019 versus 2.98 lakh in the same month last year, a fall of 17 per cent. The huge hike in insurance costs from September has also gone against the sales acceleration.

Correspondingly, the manufacturing, which has a weight of almost 78 per cent in the index, continues to slow down. Overall, the sector’s growth slowed to 3.5 per cent in 2018-19.

The new government after May 23 would have its task ready to repair the economy. India’s consumers are spending less on everything from toothpaste to automobiles, sparking fears of a growth slowdown. In fact the last six months have seen weak demand and lower sales growth in key sectors. The recent crisis in the aviation sector has put the brakes on passenger traffic growth.

An assessment by State Bank of India’s research wing has noted that out of 384 companies, more than 330 exhibited “negative growth in mid-line and bottom-line” in 2018-19. The Finance Ministry too admitted that economic growth had cooled slightly in 2018-19. The Finance ministry’s department of economic affairs said in a report titled ‘Monthly Economic Report’ for March 2019 that a declining growth of private consumption, weak increase in fixed investment and muted exports were some reasons for the slowdown.

The March quarter result of India’s FMCG companies was one of the first signs of stress. Hindustan Unilever’s volume growth was 7 per cent, a worrying dip from the comfortable double-digit growth it had recorded in the preceding five quarters. Dabur India reported a growth of only 4 per cent while Godrej Consumer Products’ domestic branded business volumes barely grew at 1 per cent. According to Nielsen data, the growth in the FMCG sector slowed to 13.6 per cent in the first three months of 2019, compared to almost 16 per cent growth recorded in the last three months of 2018. Economic data for the fourth quarter will be out by the first week of June 2019 and most experts say that growth will be between 6 per cent and 6.5 per cent.

Rathin Roy, a member of the Prime Minister Economic Advisory Council, recently sparked debate when he warned that India could be headed for a “structural crisis” if the demand created by the 100-million or so people who sit at the top of the country’s socio-economic pyramid has begun to exhaust itself. We are heading for a structural slowdown.

According to CMIE, while private investment usually accounted for two-thirds of total investment in the economy, since 2014, its share had fallen drastically by 2018-19. No economy can run on a single engine and it is a clear indicator of declining parameters in the economy. Some numbers say it all, the GDP has grown by 6.98 per cent in 2018-19 against 8 per cent in 2015-16. Industrial activity is slowing as evident in the index of industrial production as the growth of 3.69 per cent in the quarter ended in December 2018 is the lowest in the past five quarters. January IIP fell further to just 1.79 per cent. February 2019 IIP was even lower at just 0.1 percent-the lowest in 20 months.

There are some bright sparks still as in the real estate sector, the commercial segment is doing very well while demand is picking up in the residential segment as well.