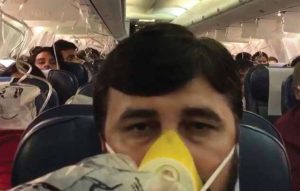 On September 20, 30 unsuspecting passengers, aboard a Jet Airways flight, literally bled through their ears and noses. The 166 passengers aboard the Boeing 737, a Jaipur-bound Jet Airways flight, were in for a rude shock when they realised the flight crew ‘forgot’ to turn on the control switch to pressurise the plane cabin. The flight, travelling from Mumbai to Jaipur, turned back shortly after takeoff. The Indian civil aviation sector has witnessed over 700 safety violations by different airlines operators, thus compromising on the safety and security of passengers between 2016 and 2017.

The number of air-safety violations is definitely alarming, but is also an indicator of the increase in aviation activity without a significant increase in the infrastructure. Exponential growth in civil aviation in terms of increasing passengers, pending induction of new planes, building of new airports and renovation of abandoned air strips has given rise to many challenges. Maintaining safety in the skies is one such complex issue.

According to the Ministry of Civil Aviation, India became the fastest growing aviation market in the world, with 19.6 per cent growth n air passenger traffic in June this year. India has recorded double-digit growth in domestic air passenger traffic for the past three years. Most of our large airports are operating at capacity or are reaching peak capacity. The number of aircraft are steadily increasing and the number of flying passengers has gone up exponentially.

The year 2016 saw the highest number of near misses ever reported in Indian airspace in a single year, i.e. 32. The rise in the number of “near miss” incidents in Indian airspace is due to growing air traffic congestion in the Indian skies. According to experts, such incidents take place when two or more planes fly at the same height, or a flight descends to the height where another plane is already flying and there is a lack of clear communication between the ATC (air traffic control) and the pilots.

Increasing congestion in Indian airspace resulted in over 90 cases of “near miss” incidents between 2015 and 2018. “Near miss” incidents generally refer to cases where the distance between two airborne planes is less than the prescribed safety limits and could result in mid-air collision. Compared to other modes of transport, such as rail or road transport, air travel is safest across the globe and also in India. When measured against the number of air travellers, the number of deaths from air crashes is minuscule.

Yet India witnessed as many as 375 air-safety violations in 2017 as compared to the 431 reported in 2016.  Some of the safety violations by various airlines included the failure to adhere to the Pilot Proficiency Check (PPC), non-compliance of FDTL (Flight and Duty Time Limitations) requirements, non-compliance of pre-flight medical requirements, unauthorised entry into the cockpit, among others.

Various other international carriers accounted for 12 incidents of emergency landings over the past two years. As far as the violation of air safety norms was concerned, Air India group registered total 77 cases last year until November, which is a 13 per cent increase over cases of safety breaches in 2016. Private carriers in the country recorded 199 cases altogether last year until November, registering a 30 per cent decline in violations as compared to 2016 when their violations were at 279.

An ageing fleet is also a major dampener for maintaining air safety. Though the average age of the fleet has come down in recent years, the transition has not been smooth. The national carrier Air India still has some planes which are more than 20 years old. Though the disinvestment-bound carrier will phase out its remaining three Classic A320 planes, which are nearly three decade old, from the fleet by the end of this year.

The Indian Commercial Pilots Association (ICPA) — one of Air India’s pilots’ bodies — had in 2015 termed these aged planes as “lethal and snag-prone” and demanded their grounding.  On the other hand, Indigo and GoAir had to ground a part of their fleet earlier this year due to a snag found in the Pratt & Whitney (PW) engines, introduced on their Airbus A320Neo planes last year. Technical issues were also reported with CFM engines on flights operated by Vistara. Five persons were killed when a private plane crashed near an under-construction building in Mumbai’s Ghatkopar area in June while trying to make an emergency landing. The privately-owned King Air C90 was in service for past 22 years and was on a test run.

After the incident, he Bombay High Court rapped the Airport Authority of India, (AAI) for not ensuring safety of air passengers and leaving it to the court for regulating the height of construction around the Mumbai Airport. America’s Federal Aviation Administration (FAA) audited the Directorate General of Civil Aviation (DGCA) in July, for the third time since 2013. And the latest FAA audit comes soon after the Indian regulator underwent an audit by the International Civil Aviation Organisation (ICAO) last November. Such audits have come in the wake of inability of the government to strengthen regulatory framework and infrastructure in accordance to the manifold increase in air passenger traffic.

According to the latest ICAO audit data, India is placed below neighbouring Pakistan, Nepal and many other countries. Hence the DGCA is now developing a system hire experts to license/oversee the controllers of AAI, which once in place, would improve the effective implementation levels as required by the ICAO. At present, the AAI is regulating as well as providing services of air traffic controllers. Failure to adhere to the international norms of air safety can affect the number of international flights operating out of India.

Adding to the woes of the aviation industry, officers of Communication, Navigation and Surveillance (CNS) department of Airport Authority of India (AAI) decided to surrender their proficiency on 24th September after a meeting on 28th August between the management and officers on the intervention of Minister of Civil Aviation Suresh Prabhu failed to resolve issues plaguing the critical unit meant for air safety. The CNS is the backbone of Air Traffic Services for the safe and smooth operation of aircraft at the airports and in the Indian airspace.

Although CNS officers continued to work at the airports across the country, they did so without the ratings or license which they had earned. The move could affect the maintenance of critical systems and risk air safety. The officers claim to have taken this step after their week-long protest last month wearing black badge against lateral hiring of inexperienced managers did not bear any result with the management.

The airlines in India have been operations on a budget crunch for years now. While Kingfisher was forced to shut shop years back, the finances of others have not been too good, with most carriers struggling to make profits, amidst rising fuel prices and other expenses. Delayed salaries have become a norm in the sector. The pilots of Air India, while awaiting their July salaries with no word on when the same will be paid, have written a scathing letter to the airline chairman in August, questioning if AI “even has enough money for regular/mandatory maintenance.”

A section of these pilots have threatened to stop operations if their pending flying allowances are not paid immediately. The loss-making carrier has been facing cash paucity since the government stopped funding the airline following its decision to privatise it last year. However, it failed to get a suitor by the required deadline, forcing it to put the privatisation plans on the backburner and reviving the capital infusion plan.

Technical glitches are not the only cause of concern. The human quotient is a major cause for concern in air safety violations. Overworked and underpaid crew, staff shortage, inebriated or sleepy pilots, cockpit brawls, et al have contributed to many ‘near miss’ situations. According to central government data, 28 pilots and 9 crew members skipped the mandatory Breath Analyser (BA) test in 2017. Pilots at most major airlines are frustrated, overworked and extremely concerned about their future. Their plight reflects a recurring worldwide air transport industry trend of tired, unhappy, often over-worked and under-valued flight-deck members.

Demotivated pilot teams are becoming a general problem in the airline industry, as many have found their status and benefits gradually eroded and downgraded — turning them into disposable commodities. In April this year, the Delhi High Court rapped the DGCA for the rising menace. It concluded that no pilot should fly for over 125 hours, 30 days in a row. The court added that “making pilots overwork is dangerous for the safety of the passengers”.

With mounting pressures on aviation infrastructure, AAI has also turned to adapting new technology. The DGCA also seems to be pulling up its socks. But every time, we cannot wait for the proverbial rap on the head to take the necessary steps. The human life is of paramount importance and such negligence cannot be taken lightly anymore.

There should be adequate rest and training schedule for the maintenance as well as the flying crew. The government authorities need to take relevant measures to provide a strong regulatory framework and robust infrastructure, along with routine checks to ensure air safety. The passengers would have asked for nothing more as they gasped for air on the affected Jet Airways flight.