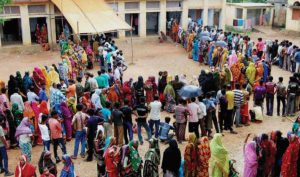 More than 63 per cent voters exercised their voting right on May 12 for the sixth and penultimate phase of the 2019 Lok Sabha election. The last phase of polls will be on May 19 and the counting will take place on May 23. Nearly 979 candidates were in the fray for the 59 constituencies that went to polls in this phase. In 2014, the voting percentage of these constituencies was 63.67.

In Delhi, the last election recorded 65. 1 per cent votes. The poll officials said the turnout was better than the 2009 elections and hoped that it will increase as polling stations witnessed long queues even at 6 pm on Sunday. The State had 30,819 polling stations with 1.43 crore eligible voters in the list.

Delhi’s seven Lok Sabha seats logged 60.17 per cent polling in the sixth round of the general elections across 59 constituencies on Sunday, with North East Delhi recording the highest figure of 63.41 per cent as the Capital’s electorate sealed its verdict in the triangular contest between the Bharatiya Janata Party (BJP), the Aam Aadmi Party (AAP) and the Congress.

The Election Commission said that the overall provisional turnout for Phase 6 was 63.67 per cent till 10pm against the 2014 figure of 63.69 per cent. West Bengal, which witnessed more political violence in the latest round of voting, topped the chart with 80.39 per cent voting.

The national capital witnessed a dip in turnout compared to the 2014 figure of 65.1 per cent, with Delhi’s chief electoral officer (CEO) Ranbir Singh saying it did not meet expectations.

While the provisional turnout figure for Delhi was lower than the figure of the previous general elections, it was the third-highest since 1977, according to official data. The voting percentage may go up after more details are received, the commission said.

In Faridabad and Gurgaon, the voter turnouts were 64.48 per cent and 67.38 per cent respectively. Union minister Rao Inderjit Singh is seeking re-election from Gurgaon, while Krishan Pal Gurjar is in the fray from the Faridabad Lok Sabha seat.

The polling in Delhi came days after the AAP and the Congress were engaged in protracted talks to stitch up an alliance but failed to strike a consensus to take on the BJP, which currently holds all seven seats in the national capital.

After voting at a polling booth at Aurangzeb Lane, the Congress chief said “love will win” in the elections, which have seen high-pitched campaigns fuelled by rhetoric, political slugfests and personal attacks among top leaders.

Speaking at an election rally in Indore later, Prime Minister Narendra Modi launched an attack on Gandhi, saying dynasty can take him to the top position of a party, but it “doesn’t bring vision and wisdom”.

Delhi chief minister Arvind Kejriwal appealed to the Delhi electorate to vote for those who have done work and not for those spreading “hatred” and “venom”.

As Delhi residents voted on Sunday, complaints of malfunctioning electronic voting machines (EVMs) were reported from several places. The AAP’s Malviya Nagar MLA Somnath Bharti alleged that EVMs at booths 116, 117 and 122 were not functioning.

Polling began late at a few booths because of glitches. The Delhi chief electoral officer said that until 3pm, the poll watchdog replaced 61 ballot units, 35 control units, and 286 Voter Verified Paper Audit Trail (VVPAT) units. The biggest number of glitches was reported in the South Delhi segment. Reports of EVM faults also came in from Chandni Chowk and West Delhi.

“One of the reasons [for the lower turnout] could be that this year, the elections coincided with the summer vacations. Many people might have already left the city. This year, elections are being held during the peak summer months. In 2014, elections were held on April 10 when the weather was still comfortable. Also, elections this time in Delhi were held on a weekend,” the Delhi CEO said.

About 14.3 million people in the national capital were eligible to vote in the polls that will decide the fate of 164 candidates. The seventh and last phase of elections will be held on May 19 and the counting of votes will take place on May 23.

Polling was also held in the sixth phase for 14 seats in Uttar Pradesh, all 10 in Haryana, eight seats each in Bihar, Madhya Pradesh and West Bengal and four in Jharkhand apart from Delhi’s seven seats. With the conclusion of Sunday’s phase, votes have been cast in nearly 89 per cent of the 543 constituencies.

At least 80 per cent polling was recorded in eight seats in West Bengal, where the BJP’s Ghatal candidate and former IPS officer Bharati Ghosh was attacked twice by local people when she tried to visit polling stations in her constituency. Ghosh suffered minor injuries when a group of women allegedly attacked her when she tried to take a BJP agent inside a polling booth at Keshpur area, an official told PTI.

Re-polling was conducted at booth number 116 in West Bengal’s Barrackpore parliamentary constituency and booth number 110 in Arambag Lok Sabha seat, along with one polling station each in Puducherry and Tripura. A poll officer was allegedly beaten up by an MLA of the BJP in Uttar Pradesh during the penultimate phase.

Maneka Gandhi and her rival Bahujan Samaj Party candidate Chandra Bhadra Singh were engaged in an argument in Sultanpur, with the BJP leader warning him that hooliganism would not be allowed. Singh dismissed her charge.

Complaints about malfunctioning EVMs poured in from several places in Delhi where voting is underway. Aam Aadmi Party’s Malviya Nagar MLA Somnath Bharti alleged that EVMs at booths 116, 117 and 122 were not functioning. “EVM in booth 132, Hauzrani is showing 50 votes without anyone casting any vote in the machine n EVMs at booths 116,117, 122 in Malviya Nagar not functioning,” Bharti tweeted.

No untoward incident was reported from any part of Jharkhand, an election official said. The state recorded a voter turnout of 64.50 per cent. The votes polled in the sixth phase of the Lok Sabha election will be counted on May 23.

Over 80 per cent of the 1,33,69,749 electorate exercised their franchise during Phase of Lok Sabha elections in eight parliamentary constituencies of West Bengal on May 12. “Except some incidents of disturbances in Keshpur, polling is mostly peaceful. We have sought reports from the district officials about the incidents,” a senior official of the state CEO’s office said. “In the eight Lok Sabha constituencies in the state, around 79.93 per cent of voters have cast their ballots till 5 pm.”

The eight constituencies are spread across five districts. There were reports of an attack on BJP’s Ghatal candidate, former IPS officer Bharati Ghosh, when she tried to enter a polling booth in Keshpur. Ghosh’s convoy was also targeted when locals started pelting stones and hurling bombs after she tried to enter another polling station in Keshpur.

One of her security guards was injured and a convoy vehicle damaged in the stone pelting following which the security officers allegedly restored to lathicharge. It was also alleged that a Trinamool Congress worker was injured in firing by personnel of the central forces, who were the BJP candidate. Ghosh, however, denied the allegation.

The official said, “So far we have not received reports of any firing. We are looking into it. Our officials in the districts have been asked to send details of the incidents of attacks on Bharati Ghosh quickly”.

The CEO also sought a report after Ghosh was seen making a videography inside a polling booth at Pikurda in Keshpur. Ghosh’s vehicle was again blocked by locals when she tried to enter Keshpur market area. The state police personnel, posted in the area, intervened and her vehicle was seized. “Her vehicle has no valid pass to move around the area on polling day. We cannot allow her to move around like this. It is a matter of security,” the police officer said.

After the seizure of her vehicle, a large number of protestors gathered there and she took shelter inside a temple in Keshpur market area, with her security officers guarding her. The mob also pelted stones at the policemen who resorted to lathicharge to disperse them. Owners of shops in the market downed the shutters.

Ghosh was then taken to Keshpur police station to protect her from the wrath of the protestors. BJP’s candidate and state party president Dilip Ghosh also faced protests from locals when he tried to visit a polling booth in his constituency, Medinipore.

Casting their votes under their chosen gender identity for the first time in general elections, the transgender voters in the national capital flaunted their inked fingers and expressed hope for a government which ensures them a better future. This is the first time that transgenders have been casting their votes under the category after Supreme Court had declared them as the “third gender” in 2014. Earlier they had to cast their votes as male or female.

According to Delhi Chief Electoral officer, a total of 660 transgenders were eligible to cast their vote besides 78,49,947 male and 64,21,283 female voters.

In a controversial remark, Congress leader Mallikarjun Kharge asked will the Prime Minister hang himself if Congress gets more number of seats than he claims. Recently, PM Narendra Modi had predicted Congress will not get even 40 Lok Sabha seats this time.

“If Congress gets more than 40 seats, will Modi hang himself at Delhi’s Vijay Chowk?” Kharge said addressing a political rally in Karnataka’s Kalburgi. The Election Commission has established a new system in the voter helpline mobile app for speedy announcement of results. “The mobile app users can view a customised dashboard consisting of his/her favourite candidate. The result from the mobile app will be in the real-time and the large auto scrolling display panels will also be provided across the nation at important places,” the panel said.

Bhupesh Baghel takes oath as the chief minister of Chhattisgarh 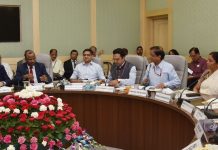 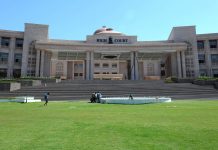