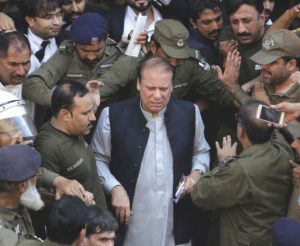 The much-trumpeted “Azadi March” of Maulana Fazlur Rahman, the chief of Jamiat Ulema-e-Islam, could be described as a non-starter in the murky politics of Pakistan, but it served a purpose that it brought the present incumbent Imran Khan to face the complexities of governance. Khan had to announce that he has full support of the army, though it was obvious that in all crucial national and international meetings, the presence of the army chief Bajwa could not be ignore. 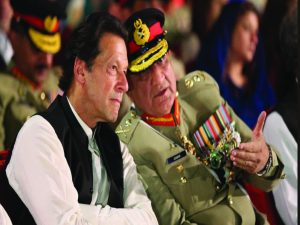 Few took the march seriously that it would oust Khan from the power, but it acted as a safety valve to express anger against the government. He was also able to serve the religious constituency of Pakistan, which is not keen for better governance in the country. The issue of massive corruption against Sharif and his party Pakistan Union of Muslim League (PUL-Noon) got diluted. The political movement against the government did not project any acceptable civilian face, which could replace Imran Khan. The all-powerful General Headquarters (GHQ), the headquarters of the Pakistani army, was also alarmed that a number of illegal financial deals during the current regime too are being rumored around.

It was also realized that Sharif is no Bhutto, a leader from Sindh, who could be hanged by the Punjabi-dominated armed forces under a managed judiciary. Nawaz Sharif and his party has a strong constituency in Punjab (Pakistan), which provides maximum soldiers to the army. In this background, Sharif could not be allowed to die without adequate medical care. Sharif was approached that if he and his family return the huge public funds siphoned off during his tenure, he might be pardoned, but he reiterated that the Khan government is acting in vendetta against him. The government’s demand for indemnity bonds as surety too was declined. Sharif and his family are known to be shrewd politicians knew that the Khan’s popularity is just waning, if not totally vanished.

Both Khan and his mentor Bajwa indulged in the political-administrative drama to have a face-saving formula. The cabinet had decided to permit Sharif to go abroad for medical treatment if he agrees to sign surety bonds making a commitment that he would return after the treatment and face corruption cases against him. Sharif’s name would be removed from the no-fly list (Exit Control List-ECL).

According to Firdous Awan, special assistant in the information department, the government has decided to allow Sharif’s treatment abroad on “human grounds and decided to allow him, but he should furnish the surety bond money, which should be equal to the fine imposed by the courts. Meanwhile, Imran Khan also met Sharif’s personal physician Adnan Khan and a lawyer Attaullah Tarar. Amidst this face-saving political drama, the judiciary came to the rescue of the establishment allowing Nawaz without any surety bonds to leave Pakistan.

Imran Khan, the cricketer-turned politician, faced a real challenge within his government, when the National Accountability Bureau (NAB) declined to decide the issue of giving permission to the ailing leader to go abroad for treatment. It appears that the Pakistani establishment or the army has also conceded the demand of Sharif to allow him to go abroad. Within Pakistan Tehreek-i-Insaf (PTI), the resistance against his decision appears to be mounting.

Among his cabinet colleagues assert that the decision to let Sharif go out on even medical grounds would hurt the party as the party won the elections on the slogan of bringing all corrupt politicians to the books. The minister for water resources, Faisal Vawda, has expressed his displeasure in a tweet. Similarly, the minister for science, Fawad Chaudhry said that he was against any decision to let Sharif fly out of the country. It also goes against much-trumpeted Khan’s statement that he would never show any leniency towards corrupt people.

However, the Imran Khan’s government’s demand that Sharif should furnish an indemnity bond worth 44million US dollars before flying out could not be implemented. The court allowed him to travel without signing the bond, and thus the political drama ended without attracting any anger from the common people. It appears Imran Khan’s political initiative to cleanse the system has just failed.

The curtain on a month-long drama was finally drawn on November 19, when Imran Khan meekly signed the permission document for Sharif’s journey to London. It also ended the six-year old rhetoric of Imran Khan and his cronies that if he is ever voted to power nor he and neither his party would send Nawaz Sharif, his family and members of his party, Pakistan Muslim League (Noon) to send for indulging in rampant corruption. However, some insiders claim that Imran Khan’s proposed project of setting up a super luxury hotel in London reported to be known in the corridors of power in Pakistan, including GHQ. 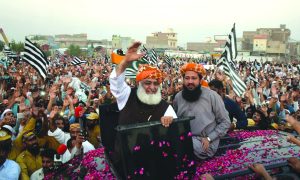 In spite of massive financial assistance to Pakistan amounting to more than seven billion in the past one year, the country’s economic woes continue to make life of the common people miserable. Amidst this deteriorating economic situation, the news of Imran Khan getting richer could have trigger off massive protests against the government. The uprising could not have been manipulated like the “Azadi March” of Maulana Fazlur Rahman.

The exact details of the alleged financial irregularities are yet to be ascertained, but the perception of Khan’s honesty is being diluted. The politics depends upon the impression people have about a ruler, especially about a celebrity. It is known that Khan is fairly rich. The initial estimates disclose that his financial net worth is approximately one million dollar. It does not include the properties he shares with his children from his wives in England and USA. On the other hand, Nawaz Sharif and his family have financial assets to the tune of four billion. His father, Mian Sharif, had set up number steel units under the banner of Ittefaq group of companies.

He and his family are accused of siphoning of the country’s wealth to further their financial interests. This allegation has been denied, but Pakistan’s National Bureau of Accountability (NAB), an organization set up to nab high and mighty in the country indulging in large scale financial bungling. The Supreme Court of Pakistan in a unanimous decision on July 22, 2017 disqualified Nawaz Sharif to hold the office of prime minister. The court also ordered NAB to file a reference against Sharif , his family and Ishaq Dar, a former finance minister of the Sharif’s cabinet for indulging in corruption.

The prosecution of Sharif began on three cases Avenfield flats in London, Flagship Investment offshore company, and the former Al-Azizia Steel Mill. The NAB court convicted Nawaz Sharif and his son-in-law Captain (retired) Safar. Sharif was given to 10 years imprisonment and Safdar had to undergo seven years and one year jail-term.

The court order given on July 6, 2018 was challenged before the Islamabad High Court, The court ‘s verdict was that the NAB has failed to prove a financial link between the former prime minister and the apartments in question”. The NAB court acquitted Sharif on December 24 in the Flagship Investment case due to dearth of evidence. He was, however, sentenced to seven years imprisonment and fined 5 billion in the Al-Azizia Steel Mill case.

During various court proceedings, Sharif sought permanent bail on the pretext of his illness and had sought permission to go abroad. The Supreme Court rejected his pleas. Meanwhile, his appeal in the case of in the Al-Azizia Steel Mill is pending and became critically ill.

A few documents exposed by a group of investigative journalists had claimed that the then Pakistani Prime Minister, Sharif, had links with eight off-shore companies. The information was sourced from a Panama-based law firm, Mossack Fonseca. It was also claimed Shaif’s family comprising his brother, Shehbaz Sharif (then Punjab chief minister) daughter, Maryam Nawaz and others were authorize to run several companies such as Nescoll Limited, Nielson Holdings Limited, Coomber Group Inc., and Hangon Property Holdings Limited. These companies acquired luxury properties in London from 2006 to 2007. The real estate was collateral for huge loans to the tune of $13.8 million.

On the basis of these leaks, Imran Khan and his political outfit, PTI and his colleague Sheikh Rasheed had filed petitions in the Supreme Court. The apex court orderd setting up of a joint investigation team (JIT) to probe the allegations, especially in context of money laundering, which had finally led to the unseating of Sharif, removal of a sitting prime minister of Pakistan by a judicial order.

With his arrival in London, Nawaz Sharif and his family, are now in a position to justify their honesty and integrity and claim that Khan’s government had deliberately implicated them in the corruption cases, which could not be substantiated. It is not important whether Sharif survives or loses. He has ensured that his brother and daughter will reassert power in Pakistan in quest of its identity and survival.