Ministers from West Bengal, Jharkhand, Rajasthan, Chattisgarh, Punjab, and Maharashtra urged the supreme court to reconsider its order and sought delay of the entrance exams, which are going to be conducted by National Testing Agency (NTA) in September.

To show protest against holding these exams, Congress interim president Sonia Gandhi along with West Bengal CM Mamata Banerjee and opposition ruled state leaders had held a meeting on August 26. In the meeting, it was decided to approach the Supreme Court for postponing the exams due to the Covid-19 pandemic in the country.

Congress is holding nationwide protests against the decision of conducting the NEET-JEE Exams. Sonia Gandhi in a video message on Friday said, “Students are our future, we depend on them to build a better India, therefore, if any decision has to be taken regarding their future it is important that it is taken with their concurrence.”

Congress leader Rahul Gandhi in his tweet said, “NEET-JEE aspirants’ safety should not compromised due to the failures of the Govt. Govt must listen to all stakeholders and arrive at a consensus.”

NTA earlier in a statement had said, “made all elaborate arrangements to sanitize the centers before and after the conduct of the examinations and all due precautions have been taken in view of Covid-19 situation in the country.” 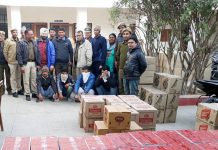