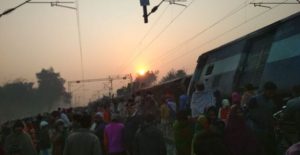 At least six people were dead and several others injured on Sunday after nine coaches of the Delhi-bound Seemanchal Express derailed in Vaishali district of Bihar, railway officials said.

The incident took place at around 3:58 am in Sahadai Buzurg.

Ministry of Railways tweeted, “We express profound grief over the loss of innocent lives in tragic derailment of 12487 Jogbani-AnandVihar Terminal Seemanchal Exp at Sahadaibuzurg in Bihar. Rescue and relief operations are at full swing. Our GM & DRM, NDRF teams, & officials of local administration are at site.”

“Railway Minister is in touch with Railway Board members and GM ECR regarding #seemanchalexpress accident. Relief and rescue operations are underway. He has expressed profound grief over the loss of innocent lives in this tragic accident and wished speedy recovery for the injured,” Piyush Goyal office added.

According to the sources, one general coach, one AC coach B3, three sleeper coaches -S8, S9, S10 and four more coaches have derailed.

A team of doctors has been sent from nearby towns of Sonpur and Barauni to the accident site.

Railway Minister Piyush Goyal also announced Rs 5 lakh compensation to the kin of the deceased. Those seriously injured in the accident will receive Rs 1 lakh.

“Railways would give ex-gratia of Rs 5 lakh each to the kin of every deceased. Rs 1 lakh would be given to the grievously injured and Rs 50,000 to those who suffered simple injuries. All medical expenses will also be born by Railways #SeemachalExpress,” Piyush Goyal’s office tweeted.