Delhi Chief Minister Arvind Kejriwal on Wednesday said the Army should be called in as police is unable to control the situation despite all its efforts.

“I have been in touch with large no. of people whole nite. Situation alarming. Police, despite all its efforts, unable to control situation and instil confidence,” Kejriwal tweeted.

“Army shud (should) be called in and curfew imposed in rest of affected areas immediately. Am writing to Hon”ble HM to this effect,” he added.

The Chief Minister on Tuesday visited hospitals to meet the victims injured in the clashes.

“Met with victims of violence being treated at the GTB Hospital and Max Hospital. Hindus, Muslims, policemen – none have escaped unhurt.. this madness must end immediately,” Kejriwal had tweeted.

The death toll in the northeast Delhi violence over CAA rose to 20 on Wednesday.

Over 150 people have been injured in the clashes that broke out between pro and anti-CAA groups in north east Delhi. 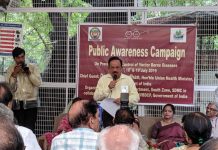