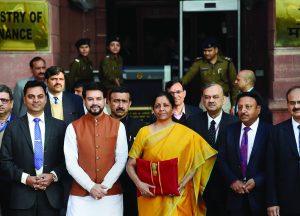 Pinning hopes on recovery in the economy, second budget of Nirmala Sitharaman aims at a higher trajectory of revenue and thus a higher growth — almost double digit– and a narrower fiscal deficit of 3.5 per cent for 2020-21.

“I leave more disposable income with the individuals by lowering the income tax slab rates and thus they will be free to decide where to invest where not to…” she added. Thus giving ore leeway to income tax payers to opt for either the old regime or the new regime without exemptions.

In line with Modi’s dictum of ‘’less government and more governance”, the budget has also unleashed a ‘faceless’ IT assessment and appeal mechanism. The budget provides for lessening of tax litigation if payment of all pending dues is made by March 31 and with a additional penalty after March till July. CEA KV Subramanian has already pinned the hopes in the Economic Survey on the ‘’invisible hand’ to guide the economy — may be he has acquired from the Neo Classical  economist and a proponent of free market economy Adam Smith.

In order to reach the target of making India a US $ 5 trillion economy by 2024, Sitaraman  has expressed optimism of a recovery in the coming fiscal the budget projects the GDP to grow at 10 per cent for 2020-21 and thus a better collection from the GST, a lower fiscal deficit at 3.5 per cent. The fiscal deficit component will also managed by higher disinvestment target which the budget this time at over Rs 2 lakh crore wherein it plans to offload shares of LIC and IDBI.

In keeping with the governments target to double farm income by 2022, it has marked almost 11 per cent hike in farm credit targeted at 11 crore  for 2020-2021 as it seeks. The budget has announced the Krishi Udaan & kisan Rail scheme for the movement agrigoods in conjunction with Ministry of Civil Aviation and Indian Railways through PPP model. It also has announced the creation of a inflation stabilisation fund which help the government maintain a healthy inflationary level absorbing mid term seasonal spikes in the inflation like that recently happened in the case of onions. Retail inflation having already climbed to a six year high till December and stood at 6.7 per cent for November.

India Inc seem to be little dismayed at the budget announcements despite the lowering of income slab tax rates and despite the abolition of the DDT.Widely there were expectations of doing away with LTCG, STT and CCT. Defending that her positive budget announcements had not had an encouraging impact on the corporates as indicated by the stock market BSE tanking a 1000 points, the FM Nirmala Sitaraman today replied to the this correspondents question and said that: “We will have to wait till a normal trading day to see the actual impact of the budget announcements on the corporate sector.”” Despite it being a Saturday and a non-trading day, both the stock exchanges were open on Saturday   for trading however with a caveat that shares bought today could only be liquidated only on next working day.

The BSE Sensex tanked by 987 points and Nifty by 300 points  on Saturday even as the FM Nirmala SItaraman tweaked downwards the tax rates in the five tax slabs which is expected to give leave more disposable income in the hand of consumers and hence boost consumption demand which is considered one of the main factors leading to the decline in the GDP growth.

The lowering of the tax rates were expected to be bullish for the as it is face with compressed consumer demand. The lowering of the income tax rates were expected to enhance disposable income with individuals and in turn push consumption demand and thus spur capacity utilisation in the manufacturing sector and lead for growth in the manufacturing sector that would push up employment. But given the already a precipitous shortfall in  tax revenues the lowering of income tax rates is may not come about. The falling revenues from GST collections particularly the latter half the current fiscal is a grim reminder of the fact that all is not well with the industry.  With this fiscal deficit is feared to shoot to more than 4.5 per cent of the GDP this fiscal, as per one school of thought.

To the question on that the corporates were expecting exemptions in STT, CCT and LTCG and were dismayed that it was not realised in the union budget today she said that: “I have given a fillip to the FPI by increasing the investment limit from 9 per cent to 15 per cent in corporate bonds. This is a positive move and would further deepen the bond market.”

Besides this the government was also looking at opening up other government securities and issue sovereign bonds for foreign investors. Experts hold that the increasing the FPI limit in corporate bonds is also likely to have a positive impact on the currency and is expected to underpin the INR to around the level of 72.50 against the USD.

In the current fiscal, for instance, the industrial production has contracted to 1.8 per cent for November on a year on year comparison. to add to this there has been an upsurge in inflation in recent weeks. For instance, consumer price inflation touched 7.35 per cent by December — highest in six years– particularly led by higher food prices. This has led to the undertones of ‘stagflation’’ in the economy. Credit off take has been dismal given the low manufacturing and capacity expansion. In fact the World Bank has squarely put its finger on the decreasing credit off take particularly from the non-banking finance sector to hit the growth in India in the coming years.

Though the government took a mid term measure of lowering of the corporate taxes — making it effective at 22 per cent for old companies and to 17 per cent for new companies as well as expanding credit growth through loan melas and merged several banks, yet the fact remains that the measures have not, in reality, helped in pushing up credit growth.  In the first eight months of the current fiscal the revenue growth has slipped to 9.82 trillion which is almost half of the targeted amount of the annual level. In another two to three months the no more than 10 per cent is expected with this, the balance of 40 per cent will remain unmatched for this fiscal.

Rural income plays a pivotal role. Although the Nirmala Sitharaman’s budget has unleashed a 16 point action plan for agriculture including an allocation of 2.83 lakh crore for agriculture, irrigation and rural activities. Providing cheaper loans, more efforts should have been placed to increase incomes, especially in the rural areas. Though the budget emphasis on higher support under PM-KISAN and PM KUSUM yojana. Rural consumption has already hit a 7 year record low. More attention was needed on MGNREGS.

But the need to push consumption demand has been the key driver of budget this time. Although the FM Sitaraman she has been highly optimistic over the recovery in the economy and has based her calculations on it, fact that the budget announcements will take time to implement and with dwindling revenues it is clear that she will have to do a tight rope walk.

◆ Companies will no longer be required to pay Dividend Distribution Tax (DDT).

◆ Aadhaar-based verification for GST compliance to be introduced.

◆ Bank deposit insurance cover had been increased from  1 lakh to  5 lakh per depositor.

◆ Government to sell part of its stake in LIC via public offering.

◆ A budget allocation of  2.83 lakh crore for the sector comprising agriculture and allied activities.

◆ Village storage scheme proposed to be run by women SHGs.

◆ Indian Railways to have refrigerated coaches capability in ‘kissan trains’ to carry perishables and milk.

◆ Proposal to set up hospitals in Tier-II and Tier-III cities with the private sector using PPP.

◆ Expand Jan Aushadhi scheme to provide for all hospitals under Ayushmann Bharat by 2025.

◆ Urban local bodies to provide internship to young engineers for a year.

◆ IND SAT exam for students of Asia and Africa to promote “study in India” programme.

◆ Budget proposes to provide  1.7 lakh crore for transport infrastructure
in 2021

◆ Chennai-Bengaluru Expressway to be started.

◆ Aim to achieve electrification of 27000 km of lines.

◆ Plan to have a large solar power capacity for Indian Railways.

◆ The government also proposes a Bengaluru suburban rail project at a cost of  18,600 crore.