Ahead of Assembly polls in Punjab next year, Navjot Sidhu is all set to be reinstated in state politics, reports RAJENDRA KHATRY 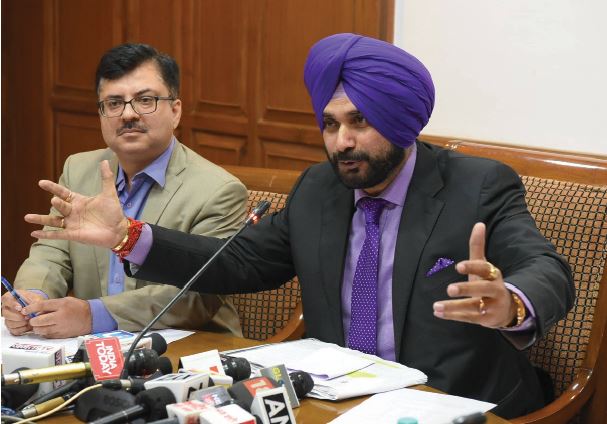 After the political hibernation of more than one and a half years, the effervescent and outspoken Punjab cricketer turned politician and a former minister, Navjot Singh Sidhu is all set to be reinstated in the Punjab Congress politics soon. To political observers, Sidhu has always been an enigma. Ignored by the Congress in Punjab for long, the party now realises that with an assembly election early next year, his services could be pretty useful.

Capt Amarinder is determined to retain power in the state in the assembly elections next year. With the BJP almost out of the political race due to its antipathy with the farmers during the ongoing farmer’s agitation over three agricultural laws, the Aam Aadmi Party (AAP) considerably weakened, and the Shiromani Akali Dal still trying to find its feet after breaking the alliance with the BJP, Congress seems to be in a stronger position than 2017 when the party came back to power after a decade.

Prashant Kishor has got the rank and status of a Cabinet minister. As for his charge, he will take a token honorarium of just Re 1 as pay. Incidentally, the strategist had been hired by the Chief Minister and the Punjab Congress for the previous Assembly elections in 2017 as well. It was Kishor who played a key role in shaping the party’s majority in Punjab. Earlier Prashant Kishor was hired by the Mamta Banerjee-led TMC in West Bengal. Elections in Bengal have already started and Kishsor is expected to focus on Punjab now.

The Congress is making an all-out effort to retain power and therefore Navjot Singh Sindhu’s services will be all the more required. Under these circumstances, Sidhu met Congress president Sonia Gandhi a week ago at her residence. According to sources they discussed considering an active role for him in the Punjab Congress party. Two kinds of speculations are going around. One is that Sidhu may be given back a ministerial berth in Punjab. The other is that he may be appointed the Punjab Congress president. But nothing is confirmed yet.

Sidhu was also invited by Punjab Chief Minister Amarinder Singh over breakfast. The Congress has realized that bringing Navjot Singh Sidhu back into the party’s scheme of things will help the Congress a great deal in dealing with the opposition during the next assembly elections scheduled to be held in January 2022.

Soon after his meeting with Sidhu, Capt Amarinder Singh expressed confidence that the former minister will be back in his cabinet. While talking to the media later the CM said Sidhu sought some time to decide his next step. He said he was sure Sidhu would be part of his team soon. With the party high command too keen to rehabilitate the former minister all paths seem clear now for Sidhu. As far as the post-Sidhu was in question, Captain said It will be decided by the Congress president Sonia Gandhi.

The credit for breaking the ice as far as getting Sidhu back on track goes to All India Congress Committee general secretary for Punjab, Harish Rawat, and party general secretary K C Venugopal. Rawat earlier met Sidhu a number of times last year, and since speculation has been rife that Sidhu will be given some special responsibility in the party. Sources say Sidhu has been eying the Punjab Congress president’s post, but Capt Amarinder Singh earlier was not very keen on handing him over the all-important post. As party president, Sidhu may also get the power of selection of candidates for the next year’s election.

However, this was not the case in Haryana when Selja was made the Haryana Pradesh Congress Committee president. As Congress Legislature Party chief, former Chief Minister Bhupinder Singh Hooda had the major say in the distribution of tickets for the assembly elections.

It is true that Sidhu has not been visible in the public ever since he resigned from the Punjab cabinet in July 2019. The temperamental politician had resigned in a huff when the Chief Minister Capt Amarinder Singh took away the Local Bodies portfolio from him.

Then the cold war started between Capt Amarinder and Navjot Singh Sidhu which lasted for 19 months. But now a thaw has been reached. To break the ice between the two leaders, former Uttarakhand chief minister and in-charge of Punjab Congress affairs, Harish Rawat met Sidhu on February 17 last in Chandigarh.

Incidentally, this meeting took place a couple of days after Sidhu met Congress president Sonia Gandhi in Delhi on February 9. Earlier there had been talks of Sidhu’s possible reentry into the party and Punjab politics, but Harish Rawat played a crucial role in this.

It is said that Sidhu wanted a more important role for himself in Punjab politics.

If this is to be done then it can be possible only if Captain Amarinder gives a nod and Sonia Gandhi agrees to it. At the moment both seem plausible.

Sidhu’s equation with Congress president Sonia Gandhi in Punjab is somewhat similar to that of Congress General Secretary Randeep Singh Surjewala in Haryana. Like Capt

Amarinder is extremely strong in Punjab, CLP leader Bhupinder Singh Hooda too is very strong. At the same time, Sonia Gandhi trusts Surjewala a great deal. Surjewala and Hooda don’t get along well and yet they both are extremely important to the Congress in Haryana politics like Sidhu and Capt Amarinder in Punjab.

Why writing obituary of AAP won’t be wise