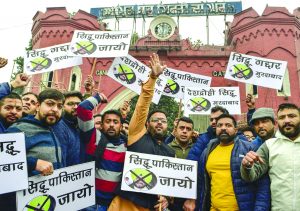 Punjab’s Local Bodies Minister Navjot Singh Sidhu is facing the heat from his own Cabinet colleagues, opposition BJP and people at large over his alleged pro-Pakistan remark after the Pulwama attack. Though the BJP, as well as the Akali Dal have demanded his removal from the Cabinet, none from Congress, the party to whom Sidhu belongs has came to his rescue. Former minister and Akali Dal MLA, Bikram Singh Majithia said “I request Congress president Rahul Gandhi to expel Sidhu from the party for speaking the language of anti-nationals. His stance will weaken India’s case for action against Pakistan at the international level.” The Shiromani Akali Dal held a protest against Cabinet Minister Navjot Singh Sidhu over his pro-Pakistan statement on the Pulwama terror attack on CRPF personnel.

SAD leaders pasted recent pictures of Sidhu hugging Pakistan army chief Qamar Javed Bajwa while mentioning quotes with it that read: “Aivien nhi buj gya chirag kayi gharan da, gaddaran vich koi zaroor apna reha hovega” (Lamp of many families did not extinguish on its own, there must be someone known among traitors). Aam Aadmi Party too raised the issue while activists of the Shiv Sena burnt posters of the Pakistan PM and Pakistan army chief. Kamal Sharma, former BJP chief said “I appreciate the stand taken by Chief Minister Capt Amarinder Singh, who has spoken like a true soldier on the issue. Politics is a serious business and if Capt Amarinder is serious, he must sack Sidhu.”

If a senior minister like Navjot Singh Sidhu gives such a statement, clearly seeking to absolve Pakistan and his friend from cricketing days, Imran Khan from the dastardly act, it was enough to trigger a social media campaign against him. During his media interaction after the suicide attack in Pulwama, Sidhu had stated “For a handful of people, can you blame the entire nation and can you blame an individual? It is a cowardly act and I condemn it firmly. Violence is always condemnable and those who did it must be punished.”

The statement did not go down well with many who took to Twitter and demanded his immediate ouster from the show. Twitterati reacted strongly and posted tweets such as “we should all boycott Kapil Sharma’s show till Sidhu is removed”, “Kapil Sharma, remove Sidhu from your show or we will boycott The Kapil Sharma Show”. Sidhu had reportedly been asked to leave the popular TV programme. Though there was no official confirmation to that. However, the latest episode of the show aired on February 24, 2019 showed comedian Archana Puran Singh chairing the show. Was it only for couple of episodes till anguish comes down or a permanent arrangement was not clear yet?

If we talk about the Congress high command, senior leader Ghulam Nabi Azad distanced himself from Sidhu’s remark saying that this was no time to hold peace talks. “We are with the government on this issue.” At the state level, Punjab Congress general secretary Pawan Dewan demanded Sidhu’s dismissal and registration of a sedition case against him for “acting as spokesperson for Pakistan”.

Navjot Singh Sidhu, however, remained defiant. He told that he had always said what was right. “I will stick to my comment”. While addressing the media, the Congress leader said,” karta koi hai aur bharta koi aur (Someone else pays for someone’s deed)”. “I will stick with my comment. Whether it’s today, tomorrow or any other day I will stick to my comment. I will stick to my comment that for the sake of few terrorists, we can’t stop development. We will not bow down in front of terrorists. We have to kill terrorist motives. If we will do the development work, then only we will demolish their wrong motive. Crush them who targeted us. Terrorist have no nation, religion or caste. I haven’t said don’t punish terrorists. Only punish those who are culprits. Someone else pays for else’s deed. Don’t target anyone else. What is the stand of my critics? I don’t care about them. I am not answerable to them. I will answer to people of Punjab. Crush them through war to those who committed the crime but can’t target everyone”.

In a controversial remark after the Pulwama terror attack, Sidhu had said, “I am saddened. The bigger point is that it is a cowardly act. Terrorists have no religion, nation, and caste. There is no doubt that a diamond cuts a diamond, a fire kills a fire and anti-dote of poison is poison. However, in places where this kind of situation occurs or war takes place, there is always a parallel dialogue. There should be a permanent solution to this”.

Sidhu’s remarks de-coupling Pakistan from not only the Pulwama terror attack but also terrorism as a whole continues his almost year-long trend of championing India’s terror-friendly neighbour and putting the Indian government down in this regard. Sidhu had gone on to say “If I compromise with truth, I will collapse as a human being. I even let go of the offer of the BJP for a six-year Rajya Sabha term for something I felt was wrong. He said “I had said yesterday that for four or five people, we can’t blame a nation or an individual. What is wrong in saying that, especially when everyone knows that the country is foremost for me, even above my personal friendship. Do I even need to prove that? I understand the sentiments of the people and my party. In a democracy everyone has an opinion. I have never encroached on anyone’s territory, but I strongly believe that nirbhayta (fearlessness) and natikta (ethics) go hand in hand. I am walking the path of truth and have not compromised on my morality. People are angry now, but they will understand that development cannot be stopped nor can peace initiatives be stopped for a dastardly act by a few individuals.” 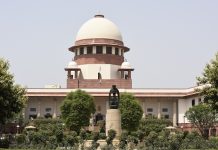