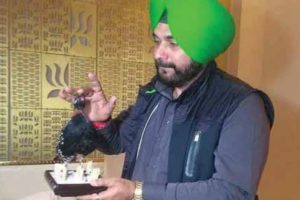 Punjab Cabinet Minister Navjot Singh Sidhu was in news sometime back when he was caught on camera in a full-on hug with Pakistan Army Chief, General Qamer Javed Bajwa. He soon courted controversy over the act with the opposition saying that his actions showed insensitivity to the Indian armed forces. However, Sidhu gave the act a positive twist and went on to say that even Prime Minister Narendra Modi often indulged in ‘hugplomacy’ with foreign dignitaries. At that time he had taken refuge in having got conceded a major demand of Sikhs of Kartarpur Corridor. He was criticised even by his own Captain, Punjab CM Amarinder Singh though Sidhu described the act as an expression of love and affection and embrace happened in a reflex action.

Now, a few months later, Navjot Singh Sidhu has landed himself again in trouble over black partridge gift from Pakistan.  Sandeep Jain, a volunteer of the Wildlife Crime Control Bureau in Punjab, said he got to know through newspapers that Punjab minister Navjot Singh Sidhu brought a stuffed Black Partridge from Pakistan and gifted it to Punjab Chief Minister Captain Amarinder Singh. Jain said it’s illegal to keep an animal or a bird or their body parts without government permission and this is a clear violation of the Wildlife Protection Act 1972.

The cricketer-turned-politician in his first meeting with the chief minister on his return from Pakistan, gifted Punjab Chief Minister, Capt Amarinder Singh, a stuffed black patridge. This prompted a Ludhiana-based wildlife activist to file a complaint with the Wildlife Crime Control Bureau of the government of India. The complainant, Dr Sandeep K Jain, a Ludhiana-based wildlife activist and Honourary State Animal Welfare Officer (a body of animal welfare board), claimed gifting partridge is a violation of the Wildlife Act.

“I have filed a complaint requesting the welfare board to probe how Sidhu gifted the partridge to the chief minister and how the protected animal could cross the border and get the customs clearance,” said Jain, who is also a member of national inspection committee of Animal Welfare Board for prevention of cruelty during transportation, slaughter and sacrifice.

Sidhu had received a stuffed black partridge as a gift from a Pakistan-based journalist during his visit to the neighbouring country on the occasion of ground breaking ceremony of Kartarpur corridor and the minister gifted it to the chief minister when he visited the latter at his residence. Amarinder Singh was little unwell and after thorough check-up was relaxing at his home when Sidhu visited him.

Sidhu who had been busy with campaigning in five states where Assembly elections had recently been held. After Congress registered a victory in three states and praises started pouring for Sidhu’s witty campaign style, he has emerged a taller leader of Congress. 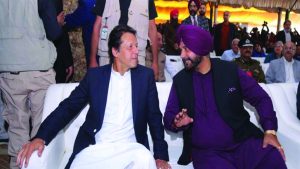 Recently, Sidhu had gone ahead with his plan of visiting Pakistan despite Amarinder Singh asking him to reconsider his decision. Later Sidhu called Rahul Gandhi his “captain” at a press conference in Hyderabad. It sent Amarinder loyalists gunning for Sidhu and the party’s central leadership had to step in to end the controversy by asking both sides to refrain from making public statements.

In the wake of “cold war” between Capt Amarinder Singh and Local Government, Tourism and Cultural Affairs Minister Navjot Singh Sidhu, the cricketer-turned-politician called on the Chief Minister in Chandigarh.

Refusing to divulge the details of the brief meeting, Sidhu, after meeting the CM, said he is a disciplined soldier of the party. He said he has got a lot of love and affection from the Congress president and Capt Amarinder Singh. Sidhu said his statement had been blown out of proportion.

On Sidhu gifting him a stuffed partridge and other gifts that the minister had brought from Pakistan, Capt Amarinder is learned to have said he would seek permission from the Wildlife Department if a stuffed partridge could be kept. Amarinder said he wanted Rahul Gandhi to be the Prime Minister. After hogging the limelight for being an aggressive campaigner in assembly elections in three states, the Sidhu’s meeting with Capt was seen in the light of party leadership advising Sidhu to iron out the differences with the Chief Minister.

The WCCB is a statutory multi-disciplinary body under the Ministry of Environment and Forests to combat organised wildlife crime.

Haryana-based volunteer Naresh Kadyan has sought an FIR against Sidhu for violating Section 39 of the Act. Ludhiana-based Sandeep Jain sought an investigation. Under the Act, the person possessing the trophy has to disclose about it to the wildlife officials at the border.

Conservationist and writer Vikramjit Singh said, “Procedurally, Sidhu should have first approached the Chief Wildlife Warden and obtained certification.” He, however, said that black partridge was not covered under the Convention on International Trade in Endangered Species of Wild Fauna and Flora.

A government functionary said the CM had already sought information from the Wildlife Department.

After attending the ground-breaking ceremony of Kartarpur Corridor in Pakistan, Punjab Tourism and Cultural Affairs Minister Navjot Singh Sidhu returned to the country and called on Captain Amarinder Singh in Chandigarh and gifted him a stuffed partridge and other gifts that had brought from the neighbouring country on Wednesday.

Black partridge is one of the unique species of birds that are found in interior Sindh in Pakistan. According to reports, the bird is now vanishing fast from its habitat due to natural and manmade reasons.

Reports said, Sidhu, gifted the stuffed partridge to Capt. Amarinder Singh in an attempt to mend ties with him in the aftermath of ‘my captain’ controversy.

After returning from Pakistan, cricketer-turned-politician Sidhu had reportedly said that his captain Rahul Gandhi had sent him to Pakistan and Rahul Gandhi is the captain of the captain (Amarinder) also.

Three Punjab ministers had demanded the resignation of Sidhu from the state cabinet following his controversial remark. Enraged over his remark, Punjab ministers Tripat Rajinder Singh Bajwa, Sukhbinder Singh Sarkaria, Rana Gurmeet Singh Sodhi had said if Sidhu, which manages local bodies and tourism portfolios, does not accept Singh as his captain, he must step down from the chief minster’s team.

Refusing to be drawn into a controversy, Sidhu said, “I have gifted it to the CM. Only he can speak on it.” Sidhu has already said the Chief Minister is like his father.