Rishi Kapoor spends most of Shuddh Desi Romance tut-tutting about kids these days. It’s not his fault; he’s been saddled with two particularly addled specimens. Raghu (Sushant Singh Rajput), a Jaipur tour guide who Goyal Saab (Kapoor) occasionally hires to play a baraati for weddings he caters at, is defined by a deathly horror of the wedding mandap. Not that wedding mandaps aren’t worthy of deathly horror being reserved for them, but, as I said, Raghu is defined by this fear. The film begins with him making a run for it at his wedding on the pretext of a loo break, leaving Goyal to deal with a Rajasthani family whose daughter has just become ample fodder for neighbourhood gossip for years. Goyal then has to watch Raghu romance Gayatri (Parineeti Chopra) — another ‘baraati’ who he cares for and looks upon with a benign, avuncular eye — and decides to marry her, only to reattempt Operation Toilet Bolt. He’s taken precautions, though, and catches Raghu, only to find that Gayatri’s smoke break wasn’t just a smoke break. All of this happens before the interval, or as the film inevitably calls it, the bathroom break.
There is genuine feeling to Kapoor’s mutterings about the knuckleheads he has to watch over in this film (as opposed to the smart, stable young people he usually babysits in his recent films). A sense of bewilderment at what young love, or at least how Bollywood perceives young love, has come to mean in the Ranbir generation. It’s not as if he is a stranger to films that redefined young love. But Bobby, while the first film to attack the materialistic core of patriarchy, did little damage to the institution of marriage. Shuddh Desi Romance, for all its efforts, does not so much bulldoze that institution as shake a vigorous fist at it. None of the three protagonists are particularly keen on the idea, but their reasons — apart from the fact that every wedding they attend seems to result in someone running off — aren’t really explored. There is only some vague spiel about how stifling marriage is.
That being said, it’s refreshing to see a film not just subvert but completely abandon the traditional Bollywood arc of romance. There is a glorious anarchy in the characters’ refusal to be typecast, to be made predictable. Both the relationships in the film are allowed to evolve as they will, for the two involved to poke around and see which way the relationship goes without all the pressure of being star-crossed and all that. You know, like in real life.
It helps that Rajput isn’t made to play Raghu as some lady-killing Casanova or even as the effervescent boy-next-door type found in today’s Bollywood, the ones who it is painfully obvious will get the girl. Instead, he is a clueless 20-something, a lost puppy pottering along trying to figure out what women want. (It also helps that Rajput is excellent in playing the role.) The film gives him very little agency; the two women more or less have control over which way the relationship goes.
How they approach that ultimately shapes the trajectory of the film. Parineeti Chopra has been a force to reckon with in her brief career so far; she shows why by playing Gayatri with a natural ease. Gayatri is, unlike Raghu, intimately familiar with what is required for a relationship to work and what is at stake (“Jab dil teesri-chauthi bar tootta hai, tab dard nahi hota, sab sunn ho jaata hai,” she says during one of the many reality TV-style confessions peppered throughout the film). Chopra’s ability to show vulnerability without resorting to hysterics and Jaideep Sahni’s wonderful dialogues make the scenes she shares with Rajput truly engaging. Debutante Vaani Kapoor, who plays Tara, the girl Raghu ditches but dates once he’s been ditched, turns in a decent performance, but has a terribly written role. Her motivations are consistently unclear, which makes her sequences with Rajput seem too contrived. All this makes the second half fall flat, and the ending, which does have great promise, resolves the love triangle in the most unsatisfying manner possible.
For all its flaws, Shuddh Desi Romance has a distinctive quality to it, an ineffable energy that ensures you never really lose interest. Maneesh Sharma is one of the few in Bollywood today who are creating a new vocabulary for talking about love, one which goes beyond the khoobsurat lafzein to make it contemporary, while also refusing to copy tropes from Hollywood romcoms. Time will tell what they write with it. 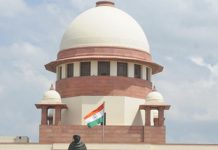