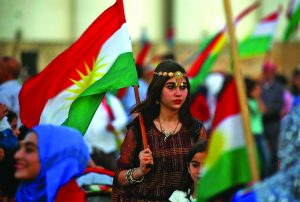 Long and cherished histories of freedom movement by various group-community-nations always attract journalists and so the relentless struggles by persecuted Kurdish people speared over the world for an integrated sovereign homeland for Kurds. A recent interaction with a young and intelligent Kurdish activist paved the way for Guwahati scribes to understand some parameters of their ongoing violent freedom struggle.

Kurds believe that they have no friend but the mountains and the Kurdish proverb can be comprehended going through their fights for a homeland where four major Muslim-dominated countries namely Turkey, Iran, Iraq, and Syria continue repressive actions against the freedom-loving Kurdish people. Even being a Muslim majority nation, Kurds have been systematically intimidated by those regimes.

Meet a Kurdish political analyst, who is based in Vancouver (Canada) and a regular contributor of media pieces to The Pasewan, Awene Weekly, Daily Hawlati, Lvin, KNN Television etc, with a mission to support establishing a Kurdish sovereign State carved out their habitat covering mountainous localities of various nations in West Asia (also known as Middle East).

Diary Khalid Marif, who bared his heart while talking to a group of scribes at Guwahati Press Club in northeast India through video-conferencing, revitalized their pledge to set-up a homeland for 40 million Kurds, who are the world’s largest ethnic group but without a State. He admitted that they have endless challenges ahead, but reminded that a hundred thousand Kurdish freedom fighters had already sacrificed their lives for the cause.

Narrating the large scale spreading of Kurds in various countries, Diary Marif revealed that there are over 20 million Kurds in Turkey. Even though their inhabitants are around 20 per cent of Turkish population, they are still denied their ethnic identity. Torturing, imprisonment and killings of Kurds are regular happenings where they cannot openly speak the Kurdish language. Moreover, Kurdish names & costumes are also banned there.

Iranian Kurdistan supports nearly 12 million Kurds (around 17 per cent population of Iran) who always suffer discrimination from the Islamic Republic in Tehran. Arbitrary evictions of Kurdish families, restricted access to housing, education, and health are primary issues for Kurds in Iran. In fact, an independent State for Kurdish people (Republic of Mahabad) existed inside Iran for some time in 1946, but soon Tehran crushed it.

Iraqi Kurdistan gives shelter to around 6 million Kurds (around 17 per cent of its population) where they initially enjoyed no rights. By Sixties only, rights for Kurds were included in the Iraqi constitution. An uncounted number of Kurds was killed by various regimes in Baghdad, where Iraqi dictator Saddam Hussein took the lead in massacring the Kurdish people.

In Syrian Kurdistan, there are over 3 million Kurds (around 10 per cent of Syrian population) who also face difficulties in various political aspects. However, Kurdish nationals there enjoy the right to citizenship, study and speak their mother-tongue. Humiliated by various government forces for decades, the Kurdish people continue fighting for their ethnic identity.

Hails from Iraqi Kurdistan and a Pune University (in Maharashtra) pass-out, Diary Marif terms India a natural ally to the Kurdish nation. Hindustan is a concept of nationalism (not necessary an entity of Sanatan religion) and the Kurdish people also prefer to categorise everyone on the basis of a nation. Kurds have never prioritized religion issues and they are still fighting for their ethnicity, he commented.

Unlike the common belief that every Muslim in the world upholds the idea of Islamic State, Kurds are totally different and the Kurdish fighters had successfully resisted Islamist terrorists in different junctures.

“Hence, every progressive and peace-loving nation, which expresses concern over the religious terrorism, should come forward supporting Kurds,” asserted Diary Marif pointing out that unlike ISIS or other Jihadi outfits, the Kurdish people maintain mutual respects to the minorities and also the women. Kurdish movement has been enriched with the active participation of their women even in the armed struggles, he added.

Thanking the Indian government in New Delhi for denouncing the recent Turkish military offensives on the Kurdish-inhabited localities of neighbouring Syria, Diary Marif also appreciated New Delhi’s advisory to its citizens traveling to Turkey. He also made a fervent appeal to New Delhi for supporting the cause of freedom-aspiring millions of Kurdish people.

Days back, the Turkish President Recep Tayyip Erdogan raised the issue of Jammu and Kashmir (of India) during 74th session of UN in New York.

The argument was to safeguard the interest of Kashmiri Muslims in the far northern locality after the abrogation of Article 370 by New Delhi. Pakistan, which has been occupying large parts of J&K, was quick to endorse Erdogan’s action as Islamabad also bats for Muslim interests.

Lately, voices of opposition are slowly growing against the governments in Ankara and Islamabad as both the Islamic regimes continue using the religious cards for their selfish interests. But in reality, both the governments have never shown dignified approaches to the Kurdish people and Balochis (who are also fighting for a sovereign Balochistan out of Pakistan since 1948).

Diary Marif termed India also a favourite destination of Kurdish students for higher studies. Acknowledged that he learned many things in India like democratic values, tolerance, dignity to minority communities and finally the unity in diversities. Finally Diary Marif admitted, he still misses typical Indian foods, people with warm hearts and lush greenery of the country.

The author is a Guwahati (northeast India) based journalist. The opinion expressed are his own