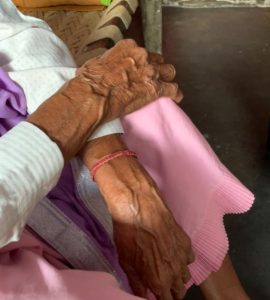 In a shocking incident in Delhi’s Chhawla, Najafgarh area, a 90-year-old woman was brutally raped and assaulted by a 33-year-old man.

The accused identified as a plumber and a resident of rewla Khanpur has been arrested and FIR registered.

DCW Chief Swati Maliwal met the women and said, “From a six-month-old-girl to a 90-year woman, no one is safe in Delhi. The perpetrator forcefully abducted the 90-year-old woman and raped her. Amma is badly injured and is in a lot of pain. She is crying a lot and said that perpetrator should be hanged.”

“Amma begged the 33-year-old perpetrator to leave her! But the drunk animal lust crossed all limits and he raped her! What kind of society is ours? Humanity has died for which both the 6-month-old daughter and the 90-year-old woman are a commodity. Shame!” Maliwal added.