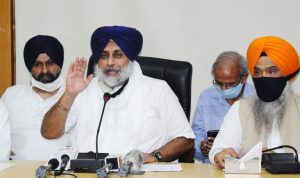 The Shiromani Akali Dal (SAD), one of the oldest allies of the BJP on Saturday decided to pull out of the BJP-led NDA alliance over the farm bills, which have triggered protest by farmers across Punjab.

SAD took this decision in the core committee meeting under the leadership of party president Sukhbir Singh Badal.

“Shiromani Akali Dal core committee decides unanimously to pull out of the BJP-led #NDA because of the Centre’s stubborn refusal to give statutory legislative guarantees to protect assured marketing of crops on #MSP and its continued insensitivity to Punjabi and #Sikh issues,” Sukhbir Badal said in a tweet.

On September 21, A delegation of SAD met President Ram Nath Kovind over farm bills. After meeting the president, Sukhbir Singh Badal said, “We requested the President not to sign on ‘anti-farmer’ bills that have been forcefully passed in Rajya Sabha. We requested him to send back the bills to the Parliament.”