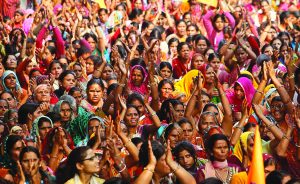 I am writing this column on the eve of the much-hyped International Women’s Day. I do realise I could have written this either a couple of days before or even after 8 March, as the deadline isn’t staring in the face. Why then I’m sitting unleashing all my thoughts and emotions right now? This is simply because I can no longer stand the sheer hypocrisy that revolves around this day. To be nearer precision, there’s immense façade around all the so called ‘days’, marked for a this or for a that! The sole purpose to these special days seems hijacked not just by the political mafia but also by the opportunists hovering around.

Getting back to the International Women’s Day, the entire façade to the ‘celebrations’ couldn’t get worse. What, with political speeches and frilly receptions and high teas! Nah, nothing concrete comes up for the women who are sitting deprived and at the mercy of the very system and the entire social structuring. Tell me, will the political speeches and hollow assurances save them from the rounds of uncertainty and violence and insecurity they face in everyday life. They could be from any possible region or religion but the social taboos and injustices and the growing political rot stand out to this day and age. Hollow development cries or claims of the political rulers have not made apparent changes to the existing ground realities. Visit any basti or mohalla or qasba or even an urban slum and there sit the disadvantaged women, battling it out on all possible fronts.

And though we aren’t permitted to enter jails and prisons to see for ourselves those behind- the –high walls happenings, but the reports on the jailed women prisoners do not carry any of the positives. In fact, it could be double whammy for them, as their minor children also sit affected. Needless to add, none of the planners seem to give a damn to open jails where these hapless women and their children could get to breathe somewhat freely!

Even the not- so –jailed amongst us are finding the going tough…tougher it gets with levels of hypocrisy and double- speak peaking by the day! Anyway, I have declined all possible invites to all those Women’s Day celebration events. Don’t know what’s there to celebrate…or what could be there to celebrate in the upcoming years! What’s the point hosting or attending gaudy receptions when murky lies the scenario.

Another worrying factor stands out: There’s this massive anti-men propaganda which has been on in the country. As though all men or boys are devils or demons or rapists. This notion or perception, is not just far away from the truth but very damaging to the very co – existence. Mind you, men and boys also get raped and molested and used and abused. They too are human beings and go through mental and physical tortures of the worst sorts. Nah, they aren’t even supposed to cry out or unleash their fears and apprehensions, nor name their women-molesters and tormentors!

To be blamed is the political rot and the very system it controls to further its intrusions. Even a serious crime such as rape is just about discussed in the television studios where the so-called experts come up with those horrifying ‘off-with-head’ sentences. Mind you, without even bothering to go to the backgrounders to the rising numbers to crime and criminals. Without even bothering to expose the sheer vulgarity that is shown on the big and small screens in the name of entertainment. Without even bothering to catch hold of the rulers of the day who manage to get away with heinous crimes, such as murders, extortions, kidnapping and much more.

Nah, it’s not a question of men and women…Here it is essential to say that there are hundreds and thousands of gentlemen. The real men! This brings me to write that men can make great platonic friends. In fact, they can be better friends than women friends. They are loyal and broadminded and well meaning, without getting into petty little mundane things. Not to overlook the fact that romantic poets from those good old yester years wrote verse after verse in praise of women and womanhood and that too without going overboard. Their romantic verse and gentle subtle relays flattering and so very touching!

And I cannot end this column without drawing your attention to some very unsettling news – more and more women are getting fitted in the various Hindutva brigades; getting extensive training to kill the other! Why don’t we talk of this grim reality: women taking up arms to indulge in sheer anarchy and horrifying rounds of communal violence. Yes, it’s one of the dark realities of these dark times we are destined to live in.