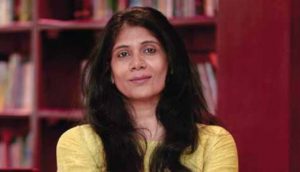 Why I picked up this recently launched book to read? Three definite reasons. Foremost, its title — Jest Like That – looked rather offbeat and with that more than beckoned. Together with that, even the publisher’s name — Atta Galatta — seemed more than offbeat and different. Above all, with Shinie Antony compiling and editing it, it simply has to be readable; after all, she delves deep into human emotions whilst writing those long and short stories, bringing to the fore touching aspects.

And as the very title relays, this anthology carries fun-cum-jest-cum-humour stories centering around everyday life. And if one was under the impression that our Indian writers write only along the routine sullen and subdued strain then stand corrected, for several of the who’s who, from the world of writers, have come up with hilarious tales….Perhaps, the most hitting is Bachi Karkaria’s ‘Last Word’, where she writes- “We don’t know whether to laugh or cry in the times we live in.

The hourly news throws up a never-before trove of OTT politicians, insane senas and an assortment of pompous and circumstance. Its all readymade for puncturing, so humour writers have it really easy, right? Wrong, for the very same reason. Real life itself has become such a caricature that its becoming more and more difficult to extend it further into a spoof.

When this gau raksha business began to be milked by vested interests, we could have joked that soon cows will be protected better than people. Before you could say ‘Brahman bull’, it was no longer a joke. In fact it was distinctly unfunny. Or take another example.

When our PM-ji started wooing NRIs in Modison Square Gardens, comics came up with one-liners about him soon becoming an NRI. Before they could think of a second — liner, he  began to resemble a Gujarati tour operator’s advertisement (complete with ‘own cook’), and the stand-ups had to back down, deprived of easy-funny.”

Stories of some writers in this anthology are indeed off beat and funny, others are still struggling, trying to make us laugh or even smile or smirk. As Bachi says, “Writing humour is easier advised than executed, you might grumble as you struggle to summon the pithy-witty. Alas, yes. If you forgive the insensitive analogy, a sense of humour is a bit like cancer. Not because it grows on you, but because either you have it or you don’t. Like the disease, your genes predispose you to it; the diet of funny writers you read feeds it; and it thrives on all the pollutants in the environment that I have mentioned the start. You can square that circle as you wish.”

Before I end my review, I have got to say that this anthology disappoints on one definite front — the layout could have been paid attention to. Also, the cover could have been more hitting and catchy. There’s a lack of the come-hither look to the cover. It should have been provocative enough to tickle if not anything else! Anyway, awaiting for the next humour book!