Unlike Captain Phillips, Hansal Mehta’s Shahid does not ignore shades of grey when it comes to dealing with its real-life protagonist, Shahid Azmi. It does not dwell on them either. Both, Azmi’s brief tryst with terrorism and the impact of his tumultuous life on his marriage get enough screen time to be deemed worthy of our attention, but the film doesn’t make much of a coherent point on either. The only time in the film that Azmi (Rajkumar Yadav) is forced to confront his past, the response of this man who was known as much for his candour as for his courage, is a blustered rant with the refrain “I could sue you for this, but I won’t”.
Now, it’s not that I hated that scene. In fact, that is more or less the reaction that anybody would have if their past was brought up by an opposing counsel during a trial where their innocent client’s freedom was at stake. But that is the only time we are given a chance to understand exactly how Azmi felt about his past (apart from a similar reaction when he reads a newspaper report calling him a ‘reformed radical’). It shouldn’t have been the only time, and if it had to be, it should have been better written.
That is a major part of what is wrong with Shahid, a film that does a decent job articulating the ideas Azmi stood for, but which is hapless in its efforts to articulate just who Azmi was. That’s a shame, because the film’s message is one that a large section of the population would do well to pay attention to.
Shahid Azmi was a human rights lawyer, who defended, among others, innocent Muslim youths who were picked up by the police after terror attacks. At a time when this practice earned the police nothing but good publicity for having made progress in its investigation and the accused’s guilt was accepted as a matter of course by the police, judiciary and the general public, Azmi was one of the few who stepped up and fought to get these youths justice. Who pointed out to society that the State’s terror policy of finding a suspect first and worrying about evidence later meant the destruction of an innocent’s life, while the actual perpetrators roamed free.
The court scenes illustrate the absurdities of our terror trials. I’m glad that Mehta and his co-writers didn’t go for the easy crutch of the dramatic court speech. Instead, they provide a realistic representation of how these trials are conducted, how the prosecutors try their best at delaying the progress of the case even when the guilt of the accused has ceased to be a matter for debate. As prosecutor More, Vipin Sharma is excellent, adding to what is already a long list of impressive performances in his career. He plays up the tragicomedy of the situation perfectly in his banter with Yadav during the trial.
But if Mehta passes up the chance for drama in his court proceedings, he fails to compensate in the rest of the film. I don’t know if it’s a case of him looking at Azmi with rose-tinted glasses — Azmi’s extraordinary life makes that not too serious a flaw — but the film struggles to approach him objectively. It’s not just that it doesn’t adequately address the baggage he carries because of his past, Shahid fails to determine what drives him. (The two, I suspect, are inter-related.) The sheer number of dramatic events that happened to Azmi in his brief life — he was just 32 when he was killed — are possibly too much to stuff into one film, but the film’s solution of addressing each of them briefly without substantiating any of them seems . It writes him a romantic angle that resembles just that, an angle thrown in to satisfy some notion of what would make the story more palatable. But when Azmi’s wife, tired of the constant drama in her life, decides to bail, nothing more is made of it.
It’s a rule of journalism that if a piece leaves you with more questions than answers, it’s not a very good piece. Shahid, while a crucially important film for what it has to say about our country, like Captain Phillips, proves that the rule applies to films as well, at least those which deal with real events. 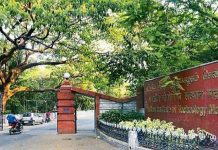