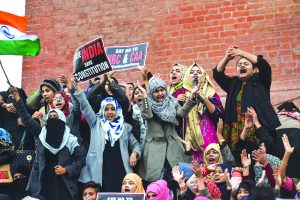 Motivated by ongoing continuous agitation over Citizenship Amendment Act (CAA) and National Register of Citizens (NRC) in Delhi’s Shaheen Bagh, a group of women with their children have started spontaneous protests at Clock Tower Park in old Lucknow area amidst fog and severe cold conditions. Administration deployed heavy police and Rapid Action Force (RAF) in the area to meet any unprecedented situation.

The support to protest has drawn good response braving the shivering chill and fog, the residents of Husainabad including large number of elderly woman had left their homes on January 17 afternoon to join it and spent the night in open space under the Clock Tower to oppose CAA and the proposed NRC exercise. By evening, the women from all religious faith and age group started joining the protest. The number went up to 300. The figures further grown up on January 19 as girls students assembled in support.

The first time women protesters along with their grandchildren determined to continue their demand to revoke CAA. “My parents and grandparents were born in India and they did not leave any papers for us to show to the government, we have assembled with our children and it is the fight for our rights,” 72 years old Rabbo told Tehelka.

Ishat Jahan, 75, said that her nephew and many others have been arrested during the protest against CAA in Lucknow on 19 December that had gone violent. “My nephew was totally peaceful but he was put behind the bars just because he opposed the government’s move. I will continue peaceful protest until he is released unconditionally,” she added.

Police and administration have adopted all tricks to disperse the protesting crowd but they failed to succeed. The administration initially snapped electricity of the place and locked public toilets. This step backfired as it further gave rise to public sympathies for the protesters and local residents allowed protesters to use their personal washrooms enlarging the scope of protest. Support for the protesters poured in shape of logistics. A Sikh family came at the place with food packets and water bottles for them. Hearing about the hardships facing by peaceful protesters some Samaritans lent their helping hand providing food, fruit juice, shawls and blankets to them.

Rahila, a protester, said, “We are determined to exercise our right to dissent over the passage of CAA law by the government adopting constitutional method of peace and non-violence. Some young boy s and men came to join the protest with us but we have not allowed, because we don’t want any violence we appealed them to stay back.”

Meanwhile the court has granted bail to various activists locked in Lucknow Jail. The president of Rihai Manch Mohd Shoaib released on bail as the Lucknow police miserable failed to place any evidences against him for provoking violence on CAA protest of December 19, 2019. Similarly, Congress leader Sadaf Jafar, who was mercilessly beaten at the police station, was set free by the court as no case of violence could be made against her with sufficient evidences. Civil Rights activist Robin Verma and Deepak Kabirtoo have been released on bail.

Addressing the media Mohd Shoaib’s advocate said, “The government has misconceived that putting us in jail and adopting oppressive could crush public agitations. We are not scared of going to jails.”

Narrating the atrocities met by him, he said, “The police wanted to know the whereabouts of General secretary Rajiv Yadav and threatened to implicate in fake cases.” He alleged that some protesters who were rounded upby police for inciting violence were released on the calls from BJP office while innocent people were sent to jail.

Meanwhile, the state BJP leaders and ministers have started a massive drive to educate public about CAA and NRC and clear misgivings created by opposition parties about the legislation. Adityanath took a stern view against Congress and Samajwadi Party as alleged to be main force behind such protests.